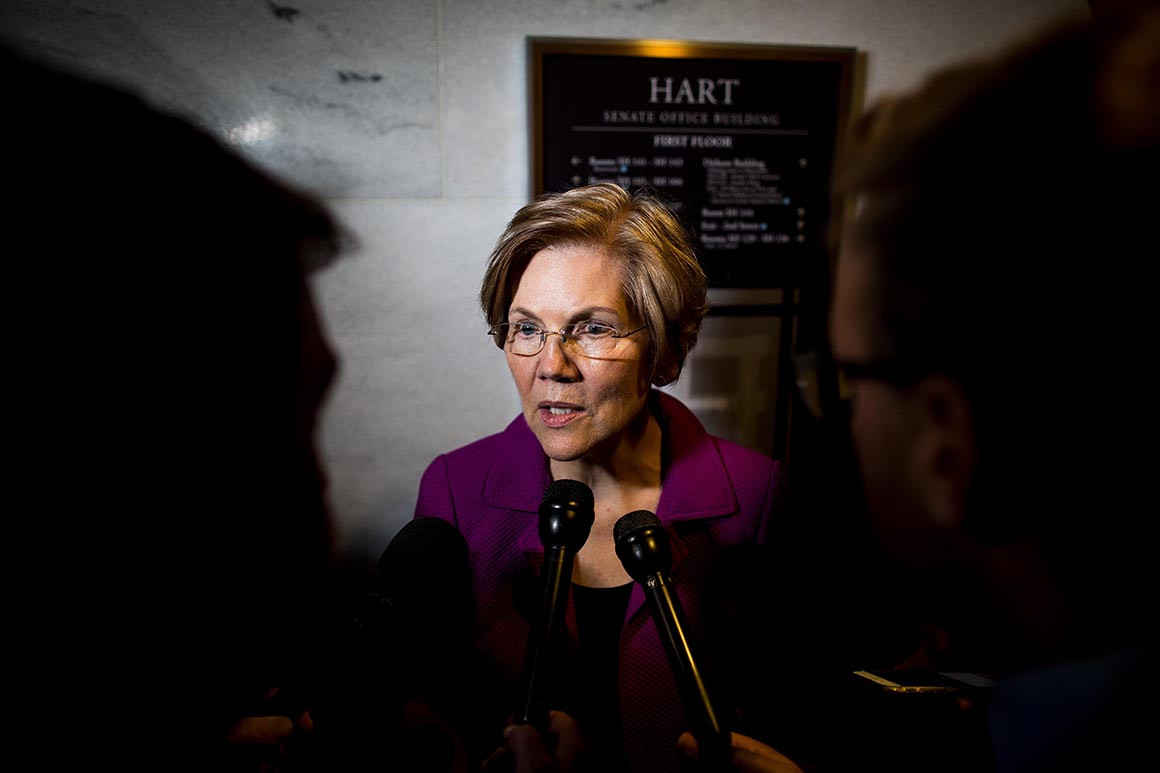 Sen. Elizabeth Warren will call Thursday for a U.S. foreign policy that “works for all Americans,” not just wealthy capitalists, and helps block the rise of authoritarianism.

In a speech at American University, the likely 2020 White House contender also will announce her opposition to President Donald Trump’s newly renegotiated trade deal with Canada and Mexico, while calling for a smaller defense budget, a pullout of U.S. troops from Afghanistan and a “no first use” nuclear weapons policy.

“Our country is in a moment of crisis decades in the making, a moment in which America’s middle class has been hollowed out, working people have been betrayed, and democracy itself is under threat,” Warren is set to say, according to her prepared remarks.

The Massachusetts Democrat will need to differentiate herself in a crowded field of Democrats, especially from other progressive favorites such as Bernie Sanders. Both Warren and Sanders have had more of a domestic and economic focus during their legislative careers. But foreign policy will be a hard issue to avoid during the 2020 race, not least because of Trump’s repeated clashes with U.S. allies and seeming fondness for autocrats abroad.

Warren has beefed up her global affairs and national security bona fides in recent years, including by joining the Senate Armed Services Committee. She makes it clear during her speech, however, that her foreign policy will be heavily influenced by the leftist economic views that helped her win political office, arguing that it’s a “fiction” to cast foreign and domestic policies as separate.

“We need to refocus our international economic policies so that they benefit all Americans, not just wealthy elites,” she plans to say. “At the same time, we must refocus our security policies by reining in unsustainable and ill-advised military commitments and adapt our strategies overseas for the new challenges we’ll face in this coming century.”

Warren, who also planned to publish an essay in Foreign Affairs on Thursday laying out her views, devotes much of her speech to bashing unfettered trade policies that she argues have left ordinary workers behind while fostering corruption among the wealthy elite around the world.

She links all of that — especially the corruption — to the rise of authoritarianism in parts of the world. And she adds that it’s clear that American hopes that capitalism would lead to more open societies were misplaced; instead, autocratic countries such as China and Russia now pose grave threats to the United States.

“Efforts to bring capitalism to the global stage unwittingly helped create the conditions for anti-democratic countries to rise up and lash out,” she intends to say. “Russia has become belligerent and resurgent. China has weaponized its economy without loosening its domestic political constraints. And over time, in country after country, faith in both capitalism and democracy has eroded.”

Warren will criticize the new trade deal covering the U.S., Canada and Mexico — NAFTA 2.0, she calls it — as a pact that “won’t stop outsourcing, it won’t raise wages, and it won’t create jobs.” She asserts that even though Trump’s rhetoric appears to be pro-worker, his policies aren’t.

“We need a new approach to trade, and it should begin with a simple principle: our policies should not prioritize corporate profits over American paychecks,” she is set to say.

Another Warren target: defense contractors, whom she accuses of having a “stranglehold” on U.S. military policy and helping bloat the Pentagon budget to more than $700 billion a year. Some of that money would be better spent on other programs, including U.S. diplomacy and infrastructure, Warren will suggest.

Warren plans to point out that Trump has refused to get tough on Saudi Arabia over the killing of Washington Post columnist Jamal Khashoggi because of his interest in moving forward with arms deals.

“It is time to identify which programs actually benefit American security in the 21st century, and which programs merely line the pockets of defense contractors — then pull out a sharp knife and make some cuts,” she’s set to say. In the past, she’s called for an end to “wasteful and duplicative” defense spending.

Warren repeatedly goes after Trump. She blasts his threat to engage in a new nuclear arms race against Russia, insisting that the U.S. does not need more nuclear weapons.

Warren plans to say the U.S. should pursue more arms control initiatives, and she comes out in favor of a “no first use” doctrine, which means the U.S. would pledge not to be the first to use a nuclear weapon in a conflict. So far, America has reserved the right to use such weapons first.

“To reduce the chances of a miscalculation or an accident, and to maintain our moral and diplomatic leadership in the world, we must be clear that deterrence is the sole purpose of our arsenal,” Warren intends to say.

The senator, who notes that her three brothers served in the armed forces, decries the U.S. military role in Afghanistan, which has lasted 17 years. She will say the U.S. must remain vigilant about stopping terrorism and that it should support a peace process involving Afghan parties, which includes the Taliban.

But, according to the prepared remarks, she will also restate her position that: “It’s time to bring our troops home from Afghanistan – starting now.”

Warren will say that the U.S. global standing will erode if Americans do not address a struggling education system, drug addiction and other problems at home. And while she warns that the U.S. must protect its elections from foreign attacks in the wake of Russia’s alleged interference in 2016, she also speaks out against domestic policies that make it harder for Americans to vote.

All of these trends are a threat to U.S. democracy, Warren intends to say.

“President Trump’s actions and instincts align with those of authoritarian regimes around the globe,” she’s set to say. “Americans must demonstrate to this president and to the world that we are not sliding toward autocracy—not without a fight.”

Source: https://www.politico.com/story/2018/11/29/elizabeth-warren-foreign-policy-1029102
Droolin’ Dog sniffed out this story and shared it with you.
The Article Was Written/Published By: Nahal Toosi