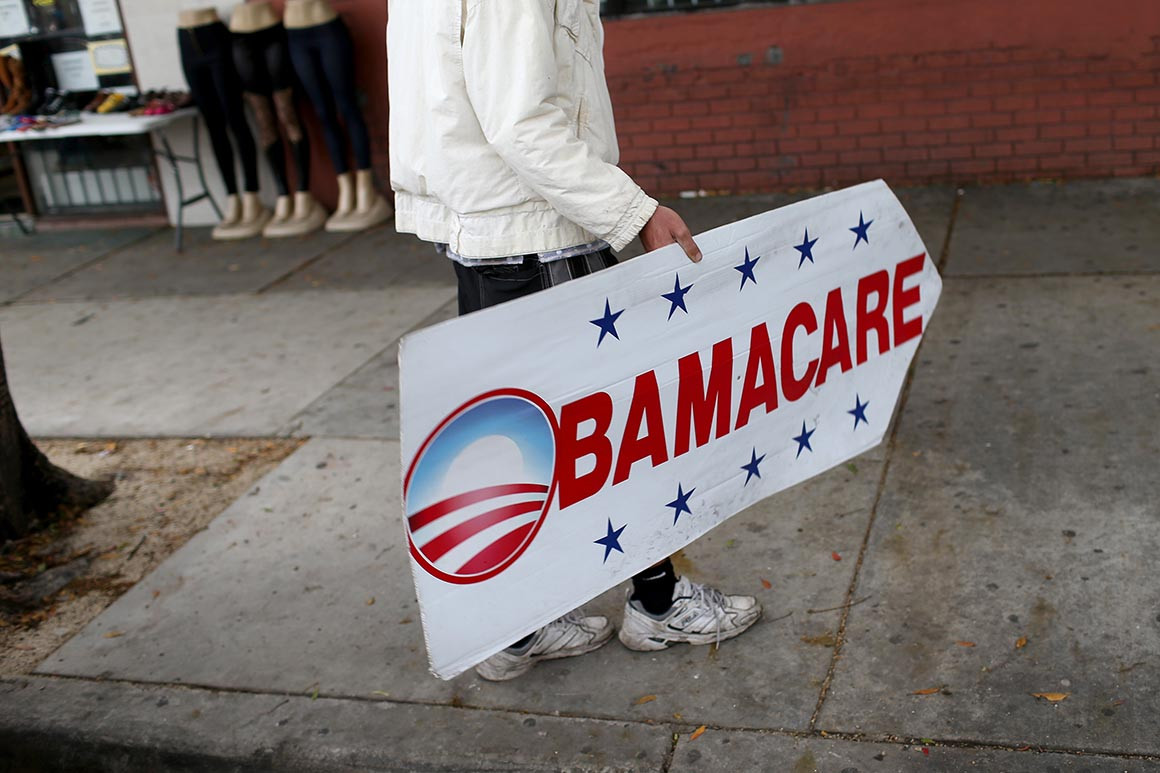 There has been a steep drop in Obamacare insurance numbers, halfway through the sign-up season for 2019, raising concerns that the Trump administration’s controversial policy changes are undermining the marketplaces.

The 9.2 percent drop to roughly 100,000 sign-ups per day has surprised close observers of the Obamacare markets, who expected the number of customers to remain fairly stable even after Republicans eliminated the unpopular individual mandate penalties for being uninsured. Premium hikes were fairly low in most states for 2019, and many parts of the country saw an increase in consumer choice as more health plans participated in what they now see as a more profitable, stabilizing market.

Insurance experts say it’s unlikely that any one major cause is behind the enrollment dip compared with last year’s enrollment period. Instead, it’s likely a confluence of headwinds.

One of the biggest challenges is probably ignorance: Hardly anyone knows that it’s open enrollment season. Just 1 in 4 Americans who buy their own health insurance or are uninsured are aware that the deadline for enrolling in coverage is Dec. 15, according to the latest polling data from the Kaiser Family Foundation.

One possible reason for this: President Donald Trump’s agencies are putting far less time and money into promoting the enrollment period than the Obama administration did.

A slow start doesn’t necessarily mean a slow end to the six-week season. A flood of sign-ups could arrive as the deadline prods the inevitable procrastinators to act. But ACA backers are worried. Enrollment nationwide peaked in 2016 at 12.7 million, according to Kaiser, and has ticked down each year since then, with 11.8 million sign-ups for the current year.

“This is affordable coverage that people need and want, but the reality is that the administration’s sabotaged open enrollment,” said Leslie Dach, chair of Support Our Care, a pro-Obamacare advocacy group, citing huge reductions in funding for outreach and marketing as particularly damaging. “The American people simply don’t know about the deadline and they’re not fully aware of how affordable health care is for them.”

Some people, particularly those who don’t get their premiums subsidized in the ACA markets, may be opting for the skimpier but cheaper plans the Trump administration is pushing as an Obamacare alternative. Some may be getting insured outside the exchanges, either in states that are finally expanding Medicaid or through employer-provided coverage in a booming job market.

The drop off applies to the 39 states that rely on the once troubled HealthCare.gov website for enrollments. Some states that run their own exchanges are seeing a more stable or improving environment. Covered California, the largest state-based marketplace, won’t release any enrollment figures until later this week. California committed to spending about $100 million on advertising and outreach this year — 10 times what the federal government is spending to drum up sign-ups for HealthCare.gov.

And there’s less of a spotlight on open enrollment compared to last year, when Republicans were still vowing to dismantle Obamacare, keeping it in the news.

“Last year the ACA received an incredible amount of free media,” Anderson said. “People were just aware of it.”

That attention may have blunted the effects of the decision to gut funding for Obamacare outreach and advertising. But this year the exchanges are likely feeling the full brunt.

Outreach groups that saw their funding slashed are focusing their limited budgets on re-enrolling existing clients rather than trying to reach new customers. The Dallas-based Community Council, for instance, eliminated advertising this year after the group lost its $1.8 million federal grant. Even though the group has managed to enroll roughly the same number of people as last year, CEO Ken Goodgames worries about the people they aren’t reaching.

“When you think about those that we serve, they are out of luck because they don’t know how to access the information or don’t speak English or don’t have technology,” Goodgames said.

Another likely reason for the decline is the removal of the individual mandate penalty, which Congress scrapped as part of its 2017 tax cut package. That’s likely spurring some people who don’t expect to need a lot of expensive medical care to take their chances by going without coverage. About 4 in 10 potential Obamacare customers indicated that they would choose to go without coverage after being told that the penalty for not buying insurance is being eliminated next year, according to Kaiser.

Also contributing is the Trump administration’s expansion of cheaper, often less robust, insurance plans that don’t meet the Affordable Care Act’s coverage requirements. The federal health law’s supporters have warned that such non-compliant plans will siphon off exchange customers, driving up costs for those who remain.

The spread of Medicaid expansion is also likely dampening ACA enrollments, since some exchange customers will be able to get free coverage. Most notably, Virginia is expected to add 400,000 residents to its Medicaid roles when expansion takes effect next year. In addition, Maine appears poised to move forward with expansion in the coming months, especially now that a Democratic governor is replacing stalwart expansion foe Paul LePage.

The booming economy is also likely depressing enrollments. The unemployment rate is down about half a percentage point since last year’s sign-up season, which means some individuals who were enrolled in Obamacare plans are likely now covered through their jobs.

The fluctuations in enrollment vary across the country. About 311,00 Texans signed up for ACA plans through the fourth week of open enrollment, compared with 334,328 over the same period last year.

“We’re certainly not panicking,” said Ken Janda, CEO of Community Health Choice. The Houston-based insurer’s seen a 15 percent dip in enrollments compared to this point a year ago, but Janda expects people who are insured to ultimately purchase plans. “What we continue to find is that once people have health insurance, they like it a lot.”

Enrollment in New York State is trending about 10 percent ahead of last year’s numbers, said Danielle Holahan, deputy director for the state’s exchange. Through Nov. 24, 870,000 people had renewed their plan and another 36,000 have enrolled. The increase comes despite the fact that prices for individual insurance rose an average of 8.6 percent this year.

Holahan attributed the success in part to the state’s commitment to Obamacare. New York still spends $14 million on advertising the exchange and $23 million on its outreach program.

Despite the sluggish enrollment, most close observers of the ACA markets aren’t sounding alarm bells about their long-term viability.

“It’s always going to be a little shaky in really low populations areas,” said Kathy Hempstead, who oversees coverage programs for the Robert Wood Johnson Foundation. “There is a point where you have a viability issue, but so far I don’t feel it’s being triggered.”

Source: https://www.politico.com/story/2018/11/28/obamacare-insurance-numbers-drop-995227
Droolin’ Dog sniffed out this story and shared it with you.
The Article Was Written/Published By: pdemko@politico.com (Paul Demko)