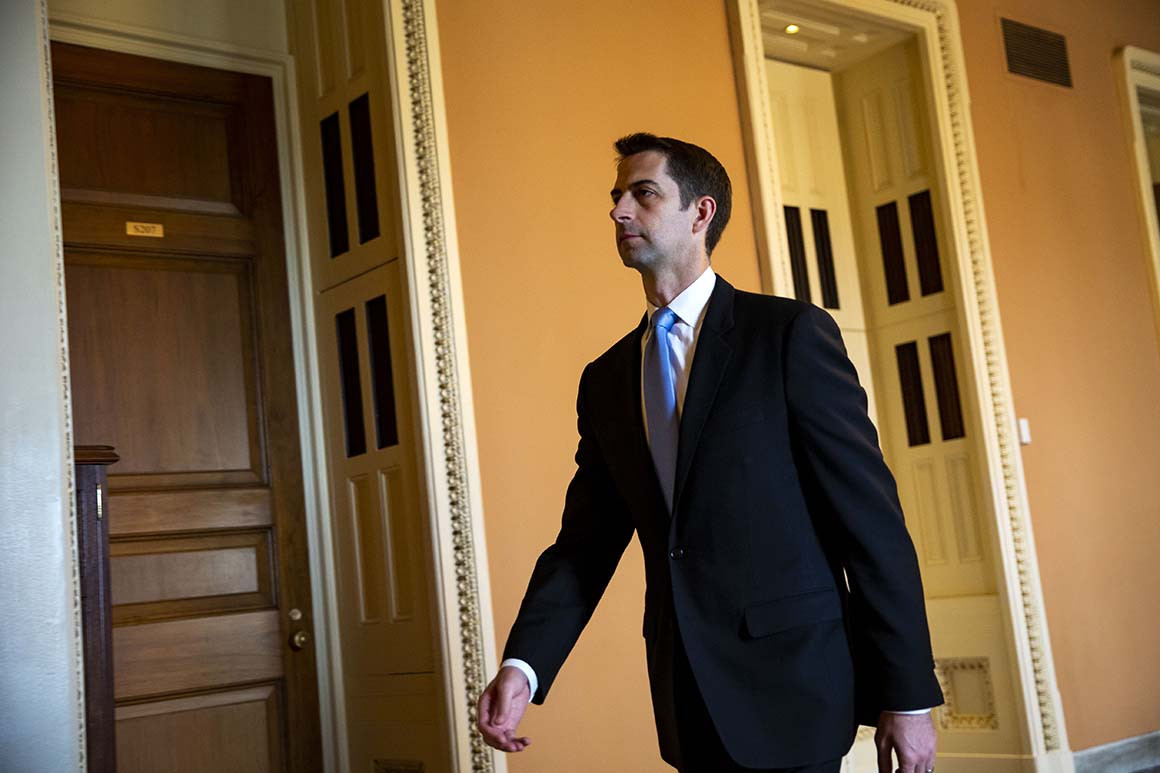 The Senate’s bipartisan sentencing and prison reform bill could make people convicted of some sex crimes eligible for early release, according to a new Justice Department analysis conducted for Sen. Tom Cotton — giving the bill’s most influential critic a new weapon against it.

Cotton is in the middle of a brutal intraparty fight over the legislation — which has strong backing from President Donald Trump — and says it allows early prison release of “violent sex offenders.”

The Arkansas Republican argues that the latest version of the bill has been rushed and contains significant flaws, and the DOJ’s recent analysis lends some credence to Cotton’s argument by saying that convicts of certain sex-related crimes could accrue credits making them eligible for supervised release or “pre-release” to a halfway house.

A DOJ analyst responded that there were no exclusions for people convicted of those crimes and that “all offenders would be eligible to receive more good time credits as a result of the bill.” DOJ referred a request for comment to the White House, which declined to respond to the DOJ analysis.

Known as the First Step Act, the criminal justice legislation is a key priority for dozens of Republican and Democratic senators in the lame duck session, including some who have fought for years to get floor time for criminal justice reform.

Cotton has publicly tangled with Sens. Mike Lee (R-Utah) and Chuck Grassley (R-Iowa) over his contention that the bill offers early release to violent criminals — something they sharply dispute. On Monday, Cotton urged his colleagues to reverse course after the DOJ issued its findings.

“Now that the Department of Justice has confirmed that the Senate FIRST STEP Act offers early release to multiple categories of sex offenders in several provisions of the bill, Congress should fix these problems instead of ramming this bill through. There is no such thing as a ‘low-risk violent sex offender’ who deserves earlier release than under current law,” Cotton said in an emailed statement.

A spokesman for Lee defended the legislation in response to the DOJ analysis on Monday and accused the bill’s opponents of “spreading fake news” about the bill.

“Just because a federal offense is not on the specific list of ineligible offenses doesn’t mean inmates who committed non-specified offense will earn early release. All inmates must first pass a DOJ risk assessment before they can even begin earning good time credits. And then they must secure certification from their warden that they are not a threat to safety before they can be released,” said Conn Carroll, a Lee spokesman.

Carroll added that Lee is open to revising the bill if it turns opponents into supporters: “If adding to the list of specifically forbidden offenses would get some senators to yes, we would love to help them do that on the Senate floor.”

The four sex-related crimes Cotton sought information on are already eligible for the former category of credits under current law, which the new criminal justice bill would expand to a minor degree in order to fix “a flawed interpretation of existing law,” Grassley spokesman Taylor Foy said.

When it comes to the second category of credits, the current version of the bill empowers the Bureau of Prisons to determine which prisoners at a “minimum or low risk” of recidivism would be eligible if they complete training programs aimed at reducing the risk of further offenses.

The bill’s long list of offenses where extra credits cannot be earned bars certain types of prisoners “regardless of their risk assessment,” Foy added. Nonetheless, the exclusion of Cotton’s four categories of offenses could hand ammunition to him and other hard-liners who want to see the bill’s sponsors start over again next year.

Given the sharp divisions between his members, Senate Majority Leader Mitch McConnell (R-Ky.) has been reluctant to bring the criminal justice bill to the floor in the lame duck. But Trump’s endorsement of the bill, and his personal lobbying of McConnell to bring it to the floor, has given proponents a major boost.

Supporters of the current push argue that delay will kill the effort outright, given the fragile bipartisan compromise struck in the lame duck. The new House Democratic majority, they note, could insist on more expansive reforms than just the bill’s limited sentencing components.

Trump himself is continuing his campaign for the bill, scheduling an event on it during his Monday trip to Mississippi to campaign for Sen. Cindy Hyde-Smith (R-Miss.).

It’s also possible that new categories of offenses could be added to the bill’s exemptions list as an amendment during Senate floor debate. Such tweaks are a relatively common occurrence on sensitive legislation, but opponents of the bill are likely to use any changes to the bill as a reason to stall it on the floor.

Source: https://www.politico.com/story/2018/11/26/tom-cotton-criminal-justice-reform-senate-republicans-trump-1015149
Droolin’ Dog sniffed out this story and shared it with you.
The Article Was Written/Published By: eschor@politico.com (Elana Schor)