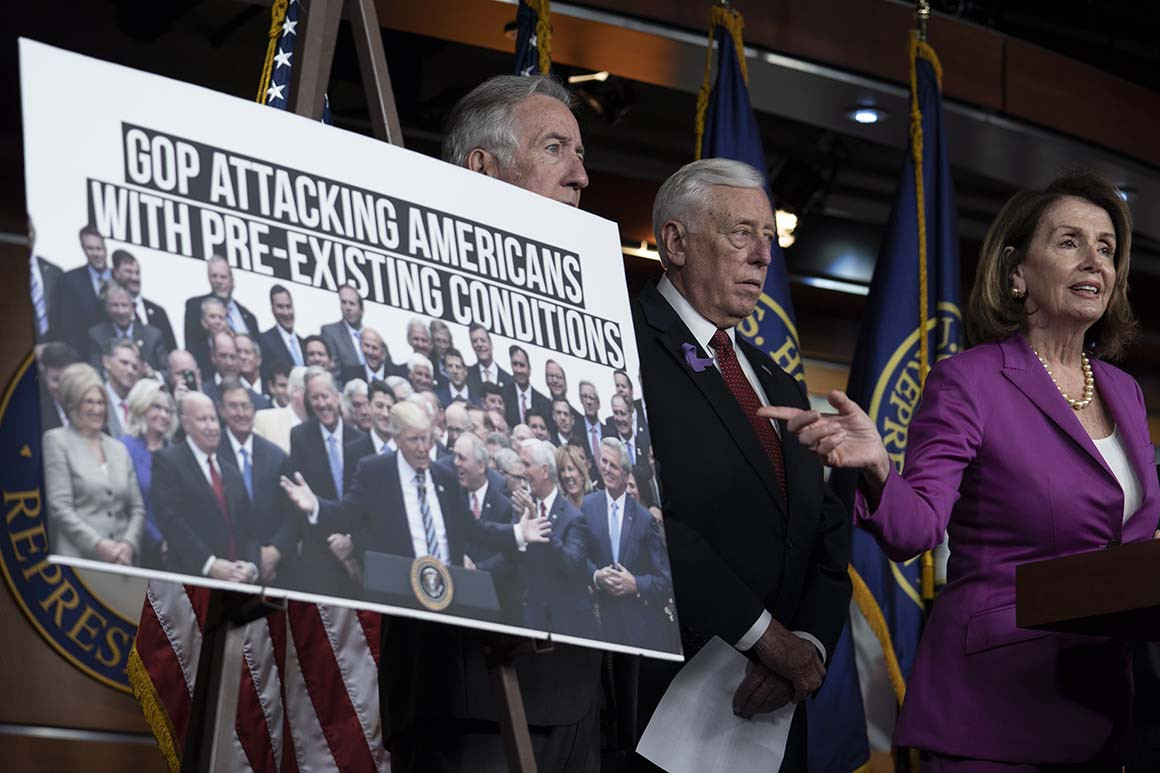 House Democrats who swept back into power on the promise to protect people with pre-existing conditions face tough legal and political choices as they try to make good on that vow.

Those promises galvanized millions of voters. But now, like the Republicans previously elected on promises to repeal and replace Obamacare, they face the formidable challenge of turning campaign rhetoric into reality.

And with the Senate and White House still in Republican hands, Democratic leaders have only one surefire weapon in their arsenal: a resolution to jump into the court fight over Obamacare’s consumer protections. That would empower the House Counsel to intervene in the lawsuit brought by 20 conservative state attorneys general that threatens to abolish the health care law.

“There’s a clear picture that the thing we will definitely do quickly is intervene in the lawsuit” to defend the law, a Democratic leadership aide told POLITICO.

Beyond that, their strategy is still up for grabs: Several key Democrats promise a more confrontational approach that includes early showdown votes with Republicans in Congress over the law’s future. First on that agenda: legislation strengthening Obamacare’s popular pre-existing condition protections that would force GOP lawmakers to go on record for or against a law that many worked for years to kill.

“Let’s nail them down,” said Rep. Jamie Raskin (D-Md.). “A bunch of Republican candidates did a complete U-turn on the pre-existing condition question, and they made it back into office based on that profession of faith. Now, everybody should be asked to commit and vote.”

Incoming Ways and Means Chairman Richard Neal (D-Mass.) has pledged repeatedly — albeit vaguely — to make a so-called vote on pre-existing conditions the party’s top priority — even if the bill dies in the Senate, or is vetoed by President Donald Trump.

Yet for all their zeal and loud promises, Democrats have yet to coalesce around a detailed plan, and some worry they have no way to inoculate the law against a looming ruling by a U.S. District Court in Fort Worth, Texas, that could declare Obamacare invalid. Early ideas for the pre-existing condition bill have yet to gain traction over concerns they’re too ambitious — or don’t go far enough.

“Everybody’s trying to figure out what we can do to tweak what’s there,” said Rep. Debbie Dingell (D-Mich.), who sits on Energy and Commerce, speaking of the Affordable Care Act. “Can we amend it, and strengthen it?”

Several lawmakers pointed to the red-state lawsuit being heard in Texas as the justification for new legislation guaranteeing consumer protections for people with pre-existing protections. The Trump administration refused to defend Obamacare in that case, arguing instead that the court should scrap its pre-existing condition protections. A group of Democratic state attorneys general, led by California’s Xavier Becerra, is defending the law.

House Democrats expressed hope they could quickly write legislation that would effectively shield patient protections from such legal challenges.

“I think that there’s going to be some rules saying the administration cannot tamper with [pre-existing condition protections],” Rep. Raul Ruiz (D-Calif.), another E&C committee member, said of the group’s goal.“That’s the objective.”

Many Democrats say they want this kind of sweeping legislation rather than a resolution just to defend the law in court, a move they fear would be toothless and politically transparent. But such legislation would likely languish in the Senate and go unsigned by the president despite Republicans’ avowals that they support such protections.

In addition, some advisers worry such an approach would undercut Democrats’ argument in the Texas case and send a confusing message to voters already unsure how much of the law still stands.

“The pressure and attention at this point should be focused on ending this frivolous suit,“ said Abbe Gluck, the director of the Solomon Center for Health Law and Policy at Yale Law School. “Not on having Congress try to pass another bill that contains what the ACA already does — and that Congress never intended to be eliminated in the first place.”

With the Senate and White House unlikely to work with Democrats on any comprehensive health overhaul, Gluck said it would be “a distraction and a mistake” for Democrats to pass a bill that merely sends the message that they support pre-existing conditions protections.

“No one — including the Texas court — should take solace in the unrealistic idea that there might be something in the wings,” she said.

Intervening in the Texas lawsuit, meanwhile, holds more immediate appeal among leadership — even though rank-and-file lawmakers say they‘ve yet to sign off on the move. House Democrats could approve that intervention on their own through a simple resolution, fortifying the ACA’s legal defense and solidifying their image as defenders of its popular patient protections.

“Then they would be allowed to really … be a part of the action,” said Sarah Somers, managing attorney at the National Health Law Program. “And politically, it’s an important optic — if not for the judge, then for the public — to see the House defending the health reforms.”

In interviews over the past couple weeks, Democrats and aides have floated additional policy priorities that could be included in a broader health care bill, from restricting the sale of short-term plans that don’t comply with Obamacare standards, to boosting funding for Obamacare outreach, to writing new provisions aimed at lowering insurance costs.

“We just want to make sure that the language is strengthening the ACA,” said Rep. Bill Pascrell (D-N.J.). “None of us ever said the document we wrote from 2010 is a perfect document.”

Those ideas enjoy wide support in the Democratic caucus, and are elements that Neal, incoming Energy and Commerce Chairman Frank Pallone of New Jersey and Rep. Bobby Scott of Virginia included in a health care affordability bill released earlier this year. Democrats have tried to link restrictions on Trump-backed initiatives like expanded short-term plans to their broader pre-existing conditions rhetoric.

“A large part of the pre-existing condition debate is really about affordability,” said one policy expert in close contact with House Democrats. “Congress is thinking about it both in terms of defense — undoing some of the harmful pieces — as well as bolstering the law.”

The discussions haven’t gone far — especially amid a fight over Democratic leadership that’s consumed much of the party’s post-midterm attention — and a broader bill would likely take longer to formulate than the quick strike on pre-existing conditions Neal and others envisioned. Plus, the bigger any prospective bill gets, the more Democrats risk giving the GOP an easy out by allowing Republican lawmakers to oppose the measure on the grounds it goes further than the ACA.

“Everyone is for the message [on pre-existing conditions],” said Rep. Jan Schakowsky (D-Ill.). “We have an absolute mandate that we better do something about health care, and we’ll be prepared to do it.”

Source: https://www.politico.com/story/2018/11/24/congress-obamacare-house-democrats-pre-existing-conditions-1012270
Droolin’ Dog sniffed out this story and shared it with you.
The Article Was Written/Published By: acancryn@politico.com (Adam Cancryn)