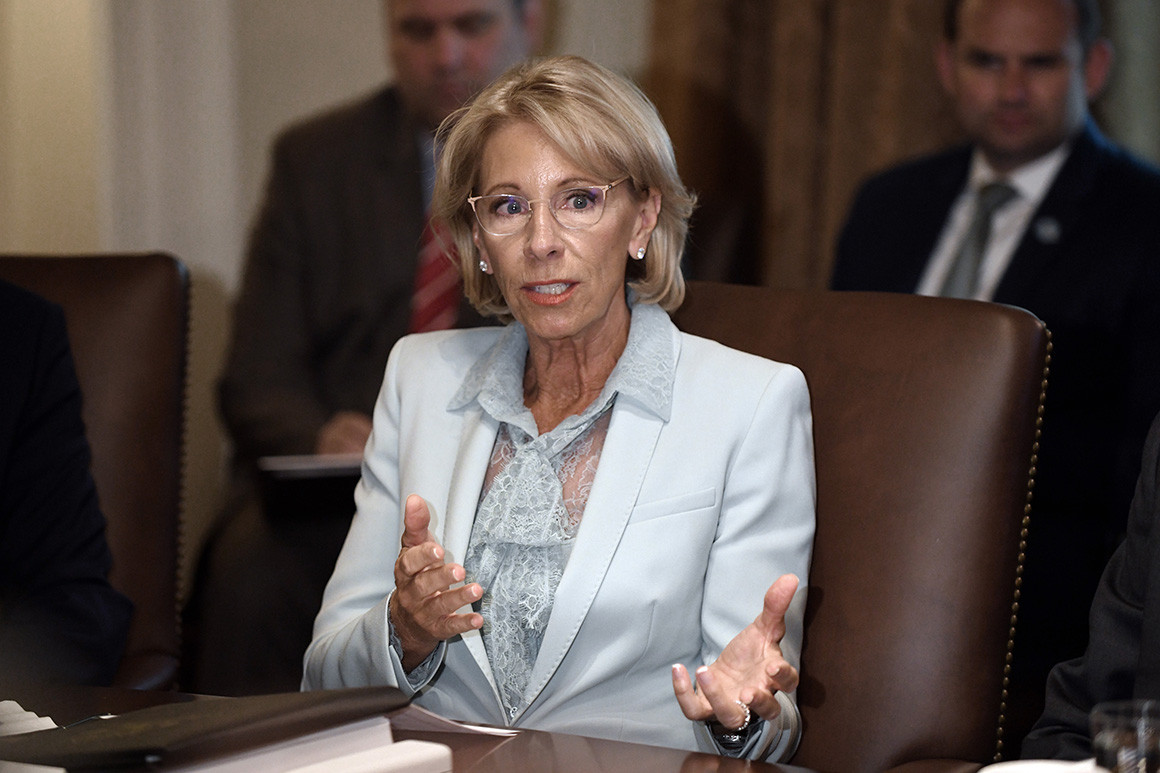 Now, they’re gearing up to fight back. Lots of them.

As many as five Democratic-led House committees next year could take on DeVos over a range of issues such as her rollback of regulations aimed at predatory for-profit colleges, the stalled processing of student loan forgiveness and a rewrite of campus sexual assault policies.

“Betsy DeVos has brought a special mix of incompetence and malevolence to Washington — and that’s rocket fuel for every committee in a new Congress that will finally provide oversight,” said Seth Frotman, who resigned as the Consumer Financial Protection Bureau’s top student loan official earlier in protest of Trump administration policies likely to be examined by Democrats.

Even in a Republican-controlled Congress, DeVos had a strained relationship at times with some committees. Her main priorities, such as expanding school choice, were largely ignored as lawmakers hashed out government funding bills. Now she will have to answer to House Democrats wielding gavels, several of whom have long worked on education issues and have been among her most vocal critics.

Rep. Mark Takano, expected to lead the Veterans’ Affairs Committee, told POLITICO that he will be tracking the effect of decisions to scale back Obama-era regulations aimed at curbing abuses by for-profit colleges that enroll tens of thousands of veterans each year.

“I want to examine the extent to which her rollbacks of regulations negatively impact veterans,” said the California Democrat.

DeVos will be squarely in the sights of the House education committee, where Rep. Bobby Scott (D-Va.) is poised to become chairman. Scott, who has criticized nearly every DeVos policy during the last two years, has vowed to act as a check on the Trump administration Education Department.

Another gavel-wielding DeVos antagonist is likely to be Rep. Rosa DeLauro (D-Conn.), who is in line to lead the Appropriations subcommittee overseeing education funding.

The panel’s oversight work, DeLauro said, will focus on ways to “hold Secretary DeVos accountable for her agency’s failure to uphold federal protections for our students.”

“I will make sure Secretary DeVos knows Americans want her to protect students and veterans, not the for-profit school industry,” she said.

DeVos will also find a powerful opponent in Rep. Maxine Waters, the presumptive chairwoman of the Financial Services Committee and liberal firebrand whose jousts with Trump have raised her national profile.

Waters (D-Calif.) earlier this month accused DeVos of a “full-on attack on civil rights protections for students—particularly students of color, students with disabilities, transgender students, and survivors of sexual assault.”

“Just as you saw us put the pressure on Corinthian [Colleges] so that they had to basically close down, I think you’re going to see more work that’s being done on private postsecondary schools,” Waters told POLITICO. The Obama administration’s crackdown on Corinthian, which was accused of misleading students, led to the bankruptcy of the massive chain of for-profit schools.

While Waters said she’ll largely be focused on the big banks and Wall Street, the panel also has jurisdiction over student loan companies and the Consumer Financial Protection Bureau.

The House Oversight Committee could take on DeVos as well. Rep. Elijah Cummings, (D-Md.), the presumptive chairman, conducted an investigation of CEO pay at for-profit schools during the Obama administration. And this past year, he and Scott expressed concern over DeVos’ treatment of the union that represents her agency’s employees.

An Education Department spokesperson declined to comment on how it was preparing for an onslaught of oversight requests.

DeVos has struck a conciliatory tone about Democrats’ coming into power in the House. “I look forward to working with Congressman Scott and the rest of the committee as well,” she told reporters last week.

Democrats across committees agreed that they’re in the preliminary steps of planning oversight of DeVos and the Trump administration.

“Those discussions are beginning to happen about coordinating with each other,” Takano said, adding that Democrats are “still in the process of organizing.”

Waters said she doesn’t know yet what the committee’s oversight work will look like, or whether she’ll have to end up sending subpoenas to agencies.

“I may be able to get with someone and sit down and talk and get a practice changed — it may not even take legislation — in Education or in Consumer Financial Protection Bureau,” she said. “I’m looking first to have some conversations.”

As they mull their targets, House Democrats can also turn to a slew of left-leaning watchdog groups that have cropped in the past two years, some of whom have already been working to put DeVos and the Education Department on the defense.

Groups like American Oversight, National Student Legal Defense Network and Democracy Forward have all filed multiple lawsuits against the department — many focusing on its ties to the for-profit education industry.

“We are certainly hopeful that the Department of Education will cooperate with the incoming Democratic chairs’ oversight requests,” said Aaron Ament, president of the National Student Legal Defense Network, which published a list of oversight topics for Democrats to take on after the election. “However, given this administration’s track record when it comes to following the law, it would not be surprising if Congress has to use subpoenas to get any useful information.”

DeVos has drawn the ire of consumer advocates and Democrats for seeking to stop states from regulating the companies that collect federal student loans. Career attorneys at the CFPB earlier this year in addition accused the Education Department of obstructing access to records it needed to pursue a high-profile lawsuit against student loan giant Navient.

Frotman, the former CFPB student loan official, wrote a scathing resignation that outlined what he said were repeated attempts by the Trump administration to undermine career officials from taking action against student loan companies and for-profit colleges.

Congressional Democrats have already seized on Frotman’s letter and called for hearings.

“I saw firsthand how DeVos’ actions have forced every type of student loan borrower — including active duty service members, veterans, teachers and older borrowers to pay a heavy price,” Frotman said. “The millions of people hurt by her actions deserve not just answers, but accountability.”

Source: https://www.politico.com/story/2018/11/24/betsy-devos-education-house-democrats-1012544
Droolin’ Dog sniffed out this story and shared it with you.
The Article Was Written/Published By: mstratford@politico.com (Michael Stratford)