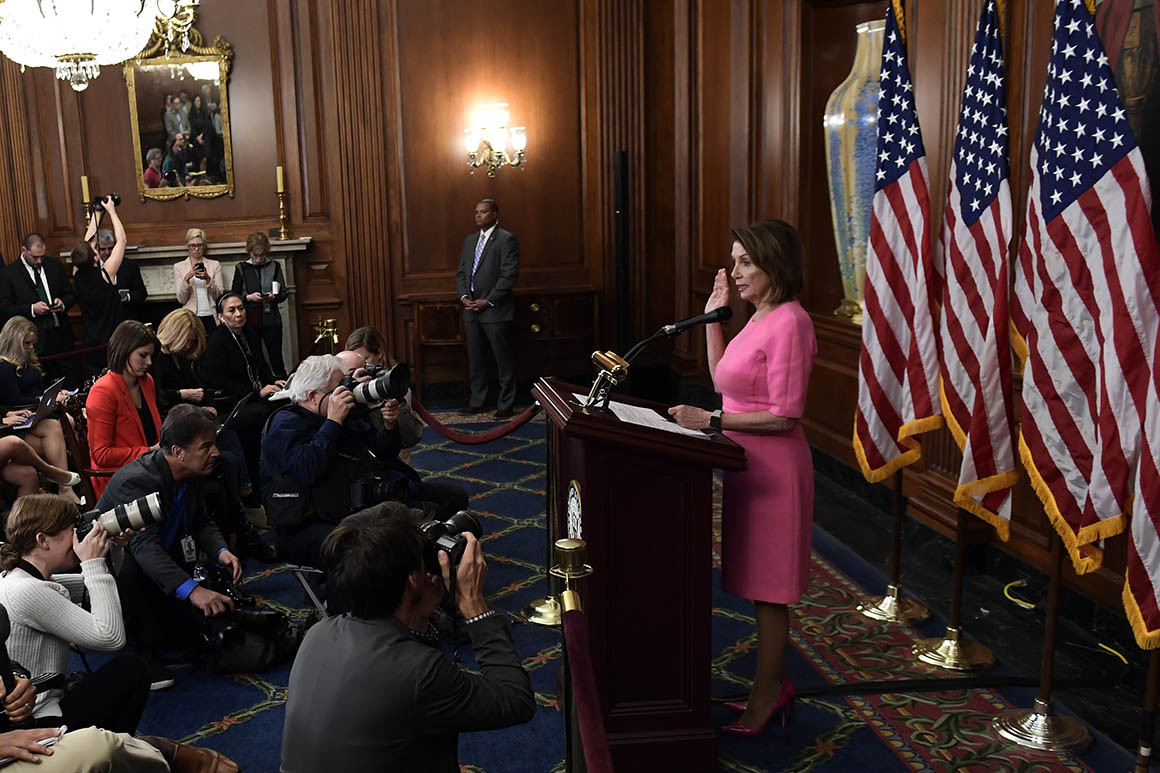 Democratic members of the bipartisan Problem Solvers Caucus are warning House Minority Leader Nancy Pelosi (D-Calif.) she won’t win their votes for speaker if she doesn’t back their proposed rules changes.

“We will only vote for a speaker candidate who supports ‘Break the Gridlock’ rules changes,” the group of nine Democrats said in a statement Friday.

Pelosi, the only declared candidate for speaker, is working to counter opposition from another group of Democrats who gathered 16 signatures from members and members-elect pledging to oppose her for speaker in a Jan. 3 floor vote. The House Democratic Caucus will vote for a speaker nominee in a closed-door meeting Wednesday, but Pelosi will need to win a majority of votes from members present and voting in January to win back the speaker’s gavel.

Rep. Marcia Fudge (D-Ohio), who weighed a bid for speaker, was on an initial draft of that letter. But she withdrew her opposition and endorsed Pelosi this week after the California Democrat offered to make her chairwoman of the House Administration Subcommittee on Elections.

Rep. Brian Higgins (D-N.Y.), who signed the letter, reversed himself Wednesday after Pelosi pledged to prioritize an infrastructure bill and legislation to open Medicare to people over the age of 50. Higgins had criticized the Democratic leader for months, vowing repeatedly to vote against her in the new Congress.

Pelosi met with Problem Solvers Democrats last week after they sent her a letter “strongly” encouraging her to embrace their proposals to “Break the Gridlock.” Pelosi described the meeting as “positive and constructive” and credited members for coming forward “with valuable solutions” to restore the House “as the great marketplace of ideas our founders intended.”

She vowed to continue working with those members “to develop changes to the rules that will break the gridlock in Washington and deliver results for hard-working Americans.” But she failed to commit to any proposals.

“While we appreciate Leader Pelosi’s broad commitment to our effort, we have yet to receive specific commitments to our proposed rules changes that would help ‘Break the Gridlock’ and allow for true bipartisan governing in this new era of divided government,” the members said Friday. “Without specific changes, we will face more of the same — small pockets of extreme ideologues will continue to block the will of the commonsense majority.”

The Problem Solvers Democrats said the midterm elections made clear that Americans want a working, bipartisan government that moves the country forward, not “obstructionism and pure partisanship.”

“Although we are at a stalemate in our discussions, and therefore cannot support Leader Pelosi for speaker at this time, we will keep working with the leader and others in hope of reaching consensus on specific rules changes for more bipartisan, common sense governing,” they said.

Source: https://www.politico.com/story/2018/11/23/psc-pelosi-1012626
Droolin’ Dog sniffed out this story and shared it with you.
The Article Was Written/Published By: nmccaskill@politico.com (Nolan D. McCaskill)

Read Evan Minsker’s review of the album. Source: https://pitchfork.com/reviews/albums/the-armed-ultrapop/ Indie Brew found this story and shared it with you. The Article Was Written/Published By: Evan Minskerv [...]

Now that toxic Anon Rep. Marjorie Taylor Greene spilled the secret that Jewish Space Lasers started the wildfires, the Secret Jewish Space Laser Corps has come out in the open and is selling shirts, badges, and pins with its “Mazel Tough” logo. — Read the rest Source: https://boingboing.net/2021/04/15/the-secret-jewish-space-laser-corps-has-awesome-swag.html?utm_source=rss&utm_medium=rss&utm_campaign=the-secret-jewish-space-laser-corps-has-awesome-swag Indie Brew found this story and shared... [...]

Last year, two days after Sufjan Stevens released his grandiose, depressive electro-pop opus The Ascension, his biological father died. Naturally, this set off an emotional chain reaction, and naturally, Sufjan has processed all those feelings through music — a lot of music. Last week he began releasing Convocations, a series of five instrumental albums spanning... [...]

In November 2018, just after he released his tremendous FM! project, rapper and Twitter comedy genius Vince Staples appeared at ComplexCon in his native Long Beach. At the panel, he announced he had already completed four more albums, the first of which was supposedly coming in January 2019. That did not happen. In fact, we... [...]

Nick Thorburn is releasing a new Islands album in a couple months, the project’s first new material since its pair of 2016 albums, Should I Remain Here, At Sea? and Taste. He announced Islomania last month with the single “(We Like To Do It) With The Lights On” and we talked to him about it... [...]

A Guide to the Afrofuturist House Music of Dirty Bird

The prolific producer has been at the forefront of an underground resurgence in house music among compatriots like Dazegxd and the Eldia collective. Read full story on the Bandcamp Daily. Source: https://daily.bandcamp.com/lists/dirty-bird-list Indie Brew found this story and shared it with you. The Article Was Written/Published By: James Guiv [...]