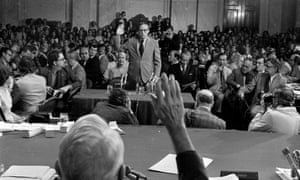 Richard Nixon would have told Donald Trump he had overstepped his powers and risked impeachment if he ordered the prosecution of Hillary Clinton and the FBI chief James Comey, a former top lawyer to the late, disgraced president has said.

“This is the sort of stuff of a banana republic,” John Dean, White House counsel to Nixon, said of a report late on Tuesday that Trump had to be talked out of commanding the justice department to bring charges against the two, whom he saw as his political enemies.

Source: https://www.theguardian.com/us-news/2018/nov/21/nixon-would-have-told-trump-charging-enemies-was-going-too-far-john-dean
Droolin’ Dog sniffed out this story and shared it with you.
The Article Was Written/Published By: Joanna Walters in New York