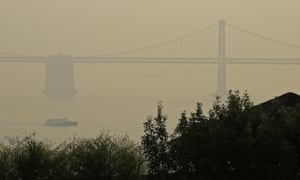 The US east coast has been provided a firsthand reminder of the deadly California wildfires after smoke swept across the country and caused a haze to envelop the eastern seaboard, including Washington DC and New York City.

Hazy skies were reported in several places on the east coast from smoke wafting from 3,000 miles further west, where wildfires in California have killed more than 80 people and razed more than 15,000 homes and other structures.

Source: https://www.theguardian.com/world/2018/nov/21/california-fires-smoke-new-york-east-coast-arrival
Droolin’ Dog sniffed out this story and shared it with you.
The Article Was Written/Published By: Oliver Milman in New York