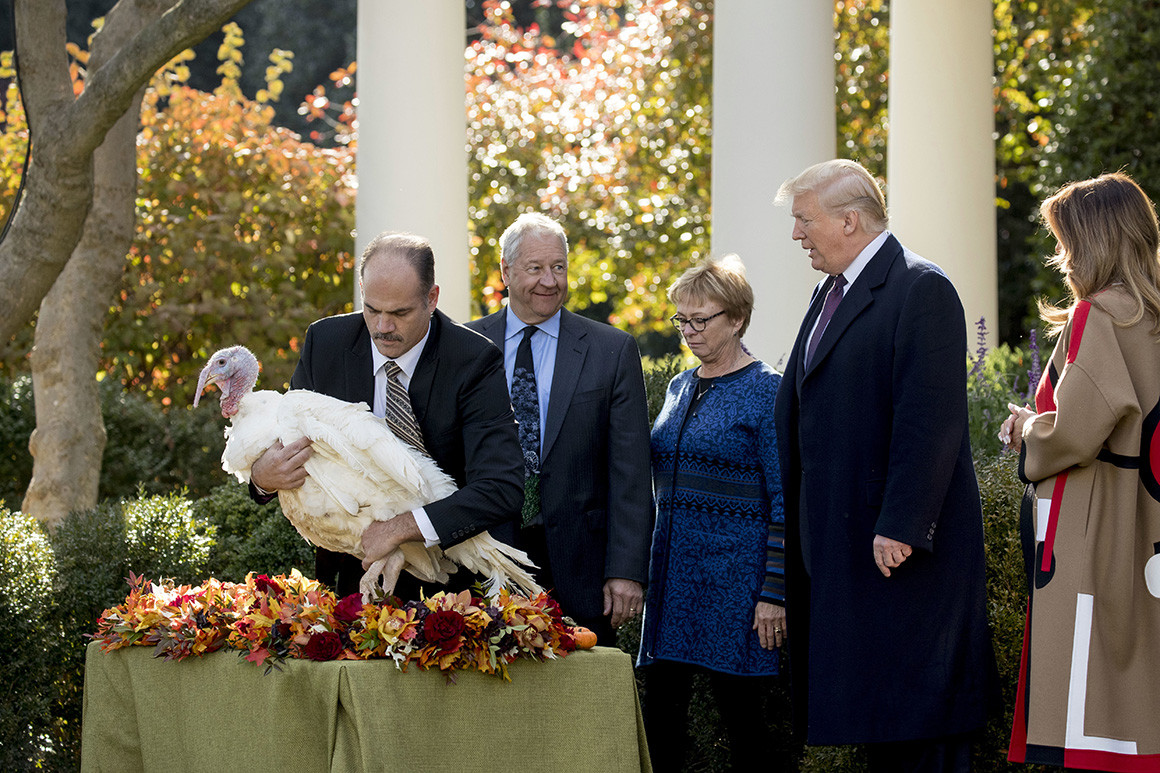 A pardon from President Donald Trump ensures that this year’s National Thanksgiving Turkey — now known as Peas — won’t be anyone’s dinner on Thursday, but it’s unlikely he’ll see another Thanksgiving.

“That turkey is so lucky. I have never seen such a beautiful turkey,” Trump said during a ceremony in the White House Rose Garden to mark the tradition. Peas and his alternate, Carrots, will now live out the rest of their days at a sanctuary called “Gobbler’s Rest” at Virginia Tech.

Yet the reality for Peas and Carrots is not a long life in country retirement. Like all other turkeys that are raised for human consumption, they’ve been bred to be plump and tasty, but they grow so big that they are likely to suffer from a variety of health problems that put their lifespan at less than a year. Wild turkeys generally live three to five years.

Take, for example, other previous, adorably named National Thanksgiving Turkeys and their alternates — “Wishbone” and “Drumstick,” “Tater” and “Tot,” “Abe” and “Honest.” Most lived for just a few months after being pardoned. Only Tater, pardoned by former President Barack Obama in 2016, “exceeded all expectations” by living for two whole years, said Rami Dalloul, who helps care for post-pardon turkeys at Virginia Tech.

For animal welfare advocates, the pardoned turkeys are a national example of the lengths to which commercial breeders go to ensure that birds are well fattened for American dinner tables at the expense of the animals’ health and well-being.

“Hundreds of millions of turkeys are genetically manipulated to be unnaturally obese, which causes a tremendous amount of painful leg deformities, joint pain and heart problems,” said Josh Balk, vice president of farm animal protection at the Humane Society of the United States.

As one industry report notes, the birds are bred to grow so fast that they often suffer from skeletal and cardiovascular disorders, turning “Ben Franklin’s tree-perching ‘Bird of Courage’ into a flightless gargantua.”

The hulking, white-feathered masses that were renamed Peas and Carrots certainly look a lot different than wild turkeys, which are naturally brown and weigh half as much as a commercially bred turkey. The pardoned birds clocked in at around 40 pounds each; wild turkeys typically weigh 20 to 30 pounds.

Commercially bred turkeys are so large that their skeletons can’t handle the extra weight, which renders them flightless. They also suffer from joint problems and can’t reproduce naturally.

“Conventional turkeys are raised for consumption,” said Beth Breeding, vice president of communications for the National Turkey Federation, which presents the pardoned turkeys to the president each year. “Their lifespans can vary if not utilized for that purpose.”

Trump said Peas and Carrots were the first National Thanksgiving Turkeys that were raised in South Dakota. Their original names were Jeff and Ruben, according to a White House pool report. All 50 birds in this year’s “presidential flock” were raised in Huron, S.D.

Since June, the birds underwent various tests to see which could best handle being around large crowds, bright lights and loud music. They were fed a diet of corn and soybean meal to fatten them up with the expectation that nearly all of them would be sent to the dinner table. Peas and Carrots were the pick of the flock, and Peas won the right to be the official National Thanksgiving Turkey via an online poll.

The pair will now be under the care of Virginia Tech’s Department of Animal and Poultry Sciences, and the school will pay for their food and medical care.

Dalloul, who is responsible for checking on the birds at Gobbler’s Rest each day, said the presidential turkeys get to roam around campus and are commonly treated as celebrities, drawing crowds of admiring fans well after the Thanksgiving holiday.

But world-class care and veterinary attention can only do so much. “We take really good care of them, and try to keep them around the same weight,” Dalloul said. But, he added, “they don’t have long life-expectancy because they’re commercial birds. When birds live for a year, that’s a very big deal.”

Source: https://www.politico.com/story/2018/11/20/trumps-turkey-pardon-isnt-much-of-a-pardon-at-all-985448
Droolin’ Dog sniffed out this story and shared it with you.
The Article Was Written/Published By: Sarah Zimmerman

At yesterday’s Climate Live concert in Stockholm, Greta Thunberg took the stage to massive applause before stating: “We’re no strangers to love.” And with that, the rickroll began. “At the end of the day, we are just teenagers fooling around with each other, not just the angry kids the media often portrays us as,” Thunberg... [...]

The story of Hawaii’s “invisible” cows

A sign near the Mauna Kea volcano in Hawaii warns visitors of “invisible” cows— dark-colored cows who are hard to spot in foggy or dark conditions. It’s become an iconic landmark, and a Mauna Kea gift shop sells invisible cow stickers (available online for $4 plus shipping). — Read the rest Source: https://boingboing.net/2021/10/18/the-story-of-hawaiis-invisible-cows.html?utm_source=rss&utm_medium=rss&utm_campaign=the-story-of-hawaiis-invisible-cows Indie Brew... [...]

From the Beatles 1966 album Revolver, “Eleanor Rigby” embodied a shift for the band from pop rock and rollers to a more mature group eager to experiment and harness the power of studio production and emerging technology. In the New Yorker, Paul McCartney wrote down the story behind all the lonely people. — Read the... [...]

Jack White – “Taking Me Back”

Jack White has always talked loud about how much he hates technology, so it’s pretty funny that he’s releasing his new single as part of the rollout for a Call Of Duty video game. Money talks, baby! White’s new song “Taking Me Back” is part of the soundtrack of the new game Call Of Duty:... [...]

The record went unrecognized for decades as the pioneering and historically important work it is. Read full story on the Bandcamp Daily. Source: https://daily.bandcamp.com/hidden-gems/roland-p-young-isophonic-boogie-woogie-review Indie Brew found this story and shared it with you. The Article Was Written/Published By: Sam McLemorev [...]