Republicans hoped to spend the final days of the special election in Mississippi coronating Cindy Hyde-Smith as the first woman to represent the state in the Senate.

Instead, the race has become a bare-knuckle brawl infused with ugly racial politics.

Hyde-Smith’s comments about attending a public hanging and suppressing liberal votes — remarks she maintained were made in jest — have upended a contest that a week ago was seen as a mere formality for the GOP. Democrats and allied outside groups have seized on Hyde Smith’s musings to spur black voters to the polls and paint her as an embarrassment to the state. They’re trying to crack open a narrow path for Democrat Mike Espy — a Cabinet secretary under Bill Clinton who would be the first African-American to represent Mississippi in the Senate since Reconstruction — as a viable alternative.

The California-based PowerPACPlus political action committee released an ad featuring images of Hyde-Smith and hanged black men in nooses. The Black Voters Matter Fund, a get-out-the-vote group, has been organizing in the state to boost Espy. The Senate Majority PAC, a pro-Democratic Senate super PAC, is pouring $500,000 into the state to help Espy.

“Our hope is that contrary to popular belief, instead of turnout going down in this runoff, that black turnout will actually go up,” added Black Voters Matter Fund co-founder Cliff Albright. 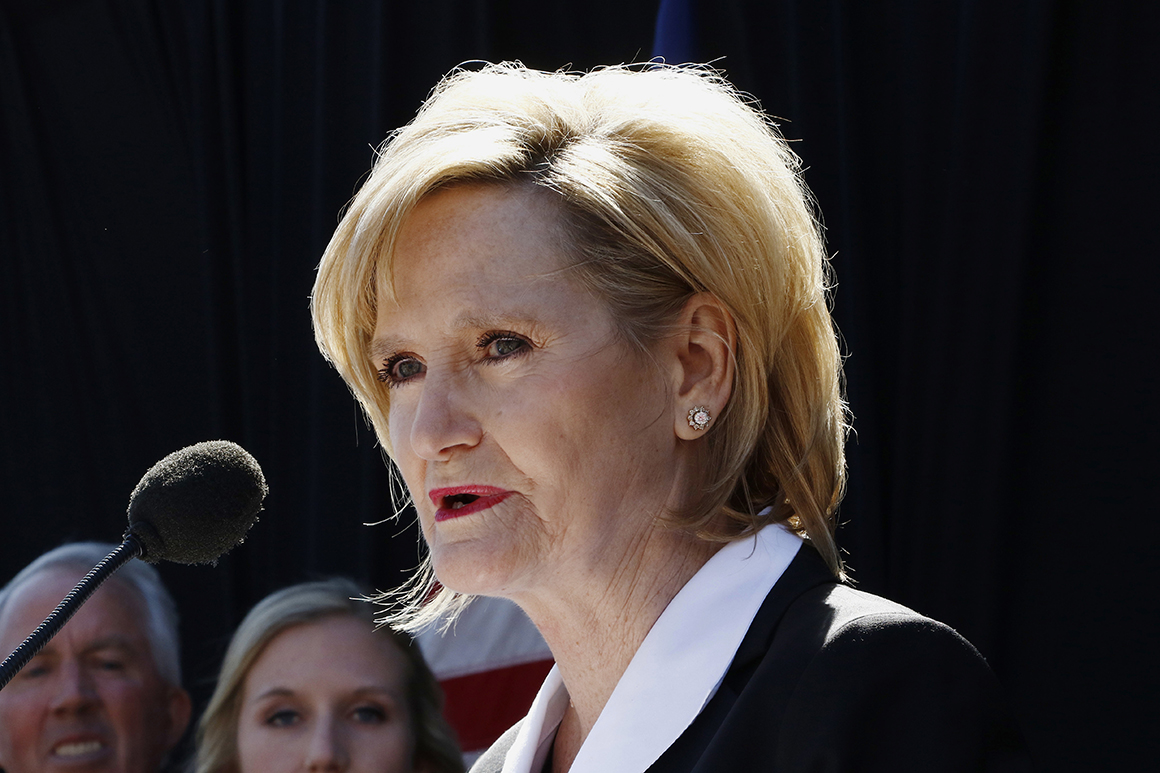 In a sign that Republicans are taking the threat seriously, President Donald Trump is set to travel to Mississippi on Monday to campaign for Hyde-Smith. The incumbent senator was appointed in April to succeed Thad Cochran and is running to fill out his term.

Democrats are working to keep Hyde-Smith’s comments in the spotlight while Espy stays mostly above the fray, campaigning on pocketbook issues like health care and college affordability. Hyde-Smith is the undisputed favorite to prevail in the Nov. 27 runoff, but the GOP’s stunning loss in a special election for Senate last year showed nothing is guaranteed.

Hyde-Smith’s comments — she was caught on video telling a supporter she’d be in the “front row” of a public hanging if he invited her, and that perhaps Mississippi should make it harder for “liberal folks” to vote — are expected to be front and center Tuesday during the only debate between Espy and Hyde-Smith. Her campaign has released statements denying ill intent with either remark.

Though they’re under no illusion about the odds, Democrats say winning in a deep-red state like Mississippi is a bit more realistic after last year’s Senate race in Alabama, when Democrat Doug Jones, buoyed by African-American support, defeated Republican Roy Moore. Mississippi has a larger African-American population than Alabama, and arguably a more active one. African-Americans helped Cochran fend off state Sen. Chris McDaniel in the runoff of a Republican primary for Senate in 2014, allowing Cochran to coast to reelection.

Democrats estimate that Espy needs at least a quarter of white voters to back him, plus high turnout among African-American voters, to win the race. But according to voter survey data during the first round of voting on Nov. 6, Hyde-Smith had 57 percent of the white vote vs. 21 percent for Espy and 18 percent for McDaniel. Among black voters, Espy had 83 percent backing, while Hyde-Smith received 8 percent and McDaniel had 3 percent. Those figures were based on an analysis by Fox News conducted in partnership with The Associated Press.

The Democratic brigade isn’t limited to outside groups. In recent days, some of the party’s most popular surrogates to the black community have moved to help Espy. Over the weekend, Sen. Kamala Harris (D-Calif.) campaigned for Espy in Mississippi. Former New Orleans Mayor Mitch Landrieu did the same. Next up was Sen. Cory Booker (D-N.J.), who came to the state on Monday, the same day former Vice President Joe Biden endorsed Espy. All of those figures are mulling presidential bids in 2020. 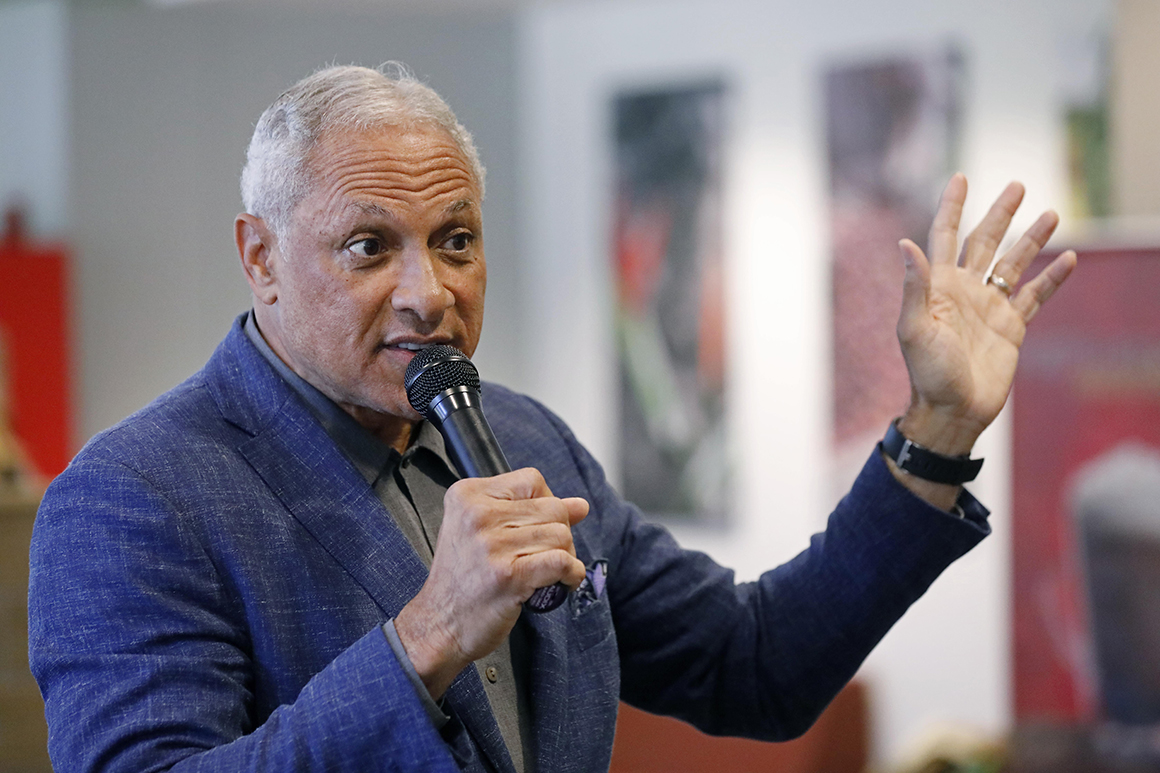 The surrogates have used the comments to frame Hyde-Smith as divisive, in contrast to Espy.

Landrieu stumped for Espy among mostly African-American audiences and said it was clear that they were aware of Hyde-Smith’s remarks and were offended by them.

“It reminded them of what the stakes are,” Landrieu said in an interview Monday. “It certainly made [the race] a little more high profile than it originally was.”

Harris, during her swing through the state, said “racism, anti-semitism, homophobia, these issues are real in this country. … Let’s speak those truths so we can deal with that.”

When pressed, Espy said Hyde-Smith’s comments exposed her as a relic of the past.

“This is 2018. Mississippi is going into the third decade of the 21st century, and we’ve got to have a senator that will unite everybody, such as myself, not divide,” Espy said in an interview with Sirius XM. Espy added that “her comments are hurtful to all of those in Mississippi, white or black.”

Republicans remain bullish on the race, but private polling has shown the margin between Espy and Hyde-Smith shrinking.

Hyde-Smith’s comments, Trump’s visit and the recent visits by Democrats popular among African-Americans have both Republicans and Democrats expecting a higher turnout than is typically seen in a special election.

“That’s why Trump’s coming in,” former Mississippi Sen. Trent Lott, a top Republican leader before he left the chamber, said in an interview on Sunday. Lott, now a lobbyist, has raised money for Hyde-Smith. He said Trump “will get massive attention, and it will really make people aware this election is a week from this coming Tuesday and it’s big, so don’t forget to come out and vote.'”

For most of this year, the Mississippi Senate race has been an afterthought for Democrats aiming to elect African-Americans to prominent offices. Their focus was on higher-profile races like Democrat Andrew Gillum’s campaign for governor in Florida and Stacey Abrams’ gubernatorial bid in Georgia.

But after Hyde-Smith’s comments, Landrieu said, attention has shifted to Mississippi.

“The elections across the country were winding down. We had the recounts going on,” Landrieu said. “I think in Mississippi, certainly African-Americans who were watching the Gillum race or the Abrams race, all of the sudden said, ‘We’ve got one more thing to do here before we finish.'”

Source: https://www.politico.com/story/2018/11/20/mississippi-senate-race-cindy-hyde-smith-mike-espy-1002739
Droolin’ Dog sniffed out this story and shared it with you.
The Article Was Written/Published By: dstrauss@politico.com (Daniel Strauss)