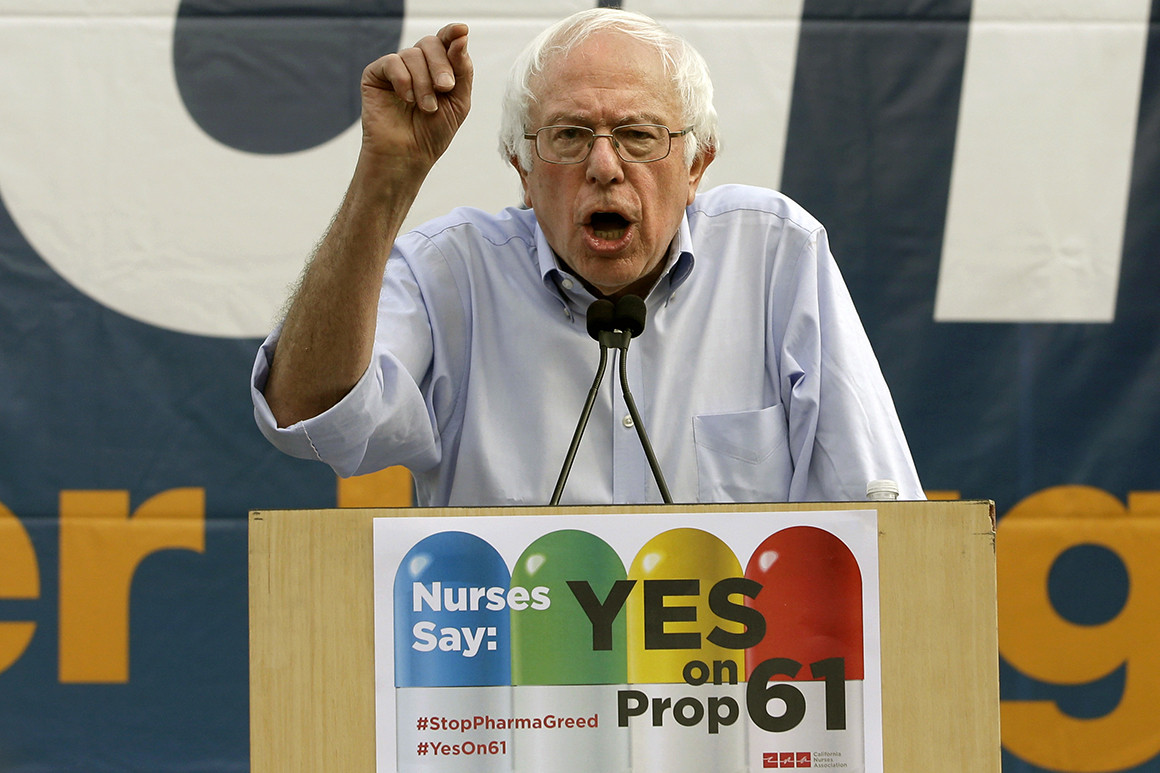 Sen. Bernie Sanders and Donald Trump are on the same page on drug pricing once again.

It’s the latest alignment on drug prices by populist politicians on opposite sides of the aisle. During their 2016 presidential campaigns, both Sanders and Trump advocated for negotiating the cost of drugs in Medicare and importing cheaper drugs from overseas. Now, they’re embracing the idea of indexing U.S. prices to the lower prices paid by other countries — in effect, relying on price controls set by other countries.

The proposed legislation stands almost no chance of gaining traction in a Republican-controlled Senate and is sure to face stiff opposition from the drug industry. But its similarities to Trump’s far narrower proposal for drugs administered as part of the Medicare Part B program speaks to the mounting pressure on both parties to address drug costs.

“I think the fact that everyone is discussing this — and you can’t escape it — suggests there will be action,” although not necessarily on these proposals, said Zeke Emanuel, a former Obama administration health adviser now at the University of Pennsylvania.

Sanders and Khanna’s bill would incentivize drug companies to charge prices in the U.S. that are comparable to those paid in countries like Canada, the United Kingdom, Germany, France and Japan. If the companies don’t cooperate, the federal government could intervene to allow generic companies to produce cheaper knockoffs.

The legislation comes just a few weeks after Trump unveiled his own plan to overhaul how Medicare Part B pays for drugs by slowly tying payments for physician-administered drugs to international prices. The administration says it will release a proposed rule for the pilot project in early 2019.

Khanna told POLTICO that one of the reasons he and Sanders are rolling out their approach now is to piggyback on Trump’s proposal. But the lawmakers would take the idea of using international reference pricing much further — applying it to the entire U.S. market, not just to one part of Medicare.

“The president has given this window, and I think it is really important to do this in the lame-duck [session] — to say, ‘If the president is serious about this, he can endorse the proposal,’” Khanna said.

“It definitely invites Donald to put his policy where his mouth is,” said Alex Lawson, executive director of Social Security Works, a left-leaning group that works to safeguard Social Security, when asked whether this is a bill Trump might be able to support.

Health policy experts said one reason Trump, Sanders and Kahanna are drawn to the idea of international reference pricing is that it’s an easy policy to explain to the public. It is, for all intents and purposes, another form of government price-setting, but it allows politicians to avoid saying they want the U.S. government to set the prices of medicines — a policy reviled by drug companies and, traditionally, by many Republicans as well.

While some may see international reference pricing as “super left-wing,” that’s not really the case, said Peter Bach, director of the Memorial Sloan Kettering Center for Health Policy and Outcomes and a former Medicare and Medicaid official under George W. Bush.

Governments typically regulate prices set by monopolies, such as those given to brand drug companies, he said.

“I do think it’s fundamentally been a blind spot for us that we grant monopolies for drugs, and we do nothing about companies taking advantage of that monopoly,” Bach said. “It’s a fairly reasonable policy to say, ‘We will grant you a monopoly. We will grant it to you for ‘x’ number of years and we will let you charge a lot of money for it. But there will be a limit.’”

But critics on both the left and right of the proposals by the lawmakers and Trump wondered why the U.S., as the world’s largest market for drugs, would rely on other countries’ price controls rather than setting its own.

“One question … is why would the U.S. outsource our determination of the right price to other countries and not just make an independent assessment ourselves?” Emanuel said. “Why do we think Canada and Germany [are] better than we are at determining the right price?”

Ben Ippolito, who works on health economics at the free-market think tank American Enterprise Institute, had a harsher assessment: “It certainly feels like even Bernie Sanders doesn’t want to talk too much about actually setting prices; instead we’d like to back our way into it,” he said. But “if you really want to regulate prices at the federal government, then just regulate prices.”

The drug industry, meanwhile, panned the legislation before it was formally unveiled.

“This legislation would have the same devastating impact on patients as the administration’s proposed International Pricing Index model,” said Nicole Longo, spokesperson for the drug industry trade group PhRMA. “Patients in countries whose governments set prices wait years for new medicines and have far fewer treatment options. These policies reduce investment in research and development, slow progress in creating tomorrow’s cures and will result in Americans having access to fewer new medicines.”

Sanders and Khanna will formally introduce the legislation in the next Congress, but say they are putting it out now to help set the agenda for the next Congress, in which House Democrats plan to make drug pricing a top priority.

If their bill were to become law, they say, the median price of brand name prescription drugs could go down by more than 40 percent. For example, GlaxoSmithKline’s asthma medicine Advair Diskus, which currently costs about $390 for a 30-day supply, could drop to $222, based on the prices paid in the five countries outlined in the bill. Lantus, an insulin made by Sanofi, could cost $220 for a 30-day supply, down from $387, based on what other countries pay.

Despite Trump and Sanders getting on the same page, many conservatives think the Republican Party will not back international reference pricing approaches to drug costs.

“I just don’t see a swell of support for this,” said Doug Holtz-Eakin, president of the conservative American Action Forum. “This is tantamount to bringing to the U.S. price controls … and conservative aren’t fond of it.”

Source: https://www.politico.com/story/2018/11/20/bernie-sanders-donald-trump-drug-prices-1005764
Droolin’ Dog sniffed out this story and shared it with you.
The Article Was Written/Published By: skarlin@politico.com (Sarah Karlin-Smith)