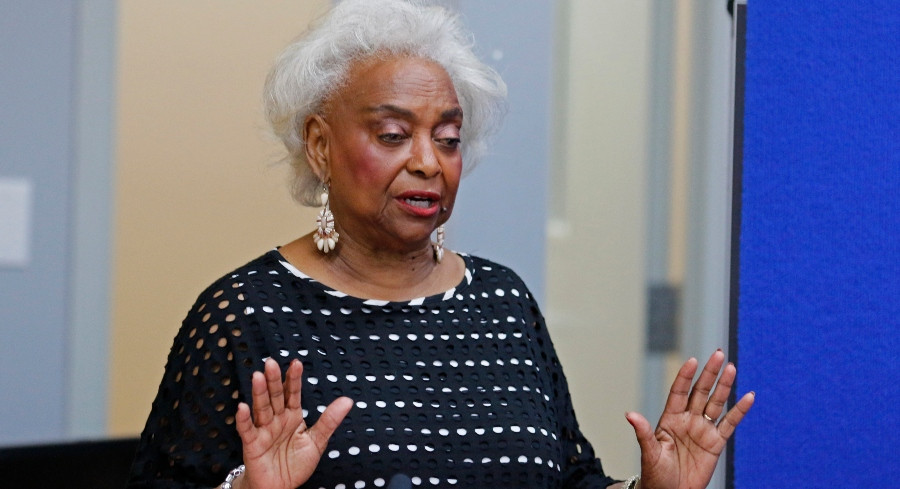 Facing the likelihood of an embarrassing removal from office, Broward County’s much-maligned election supervisor, Brenda Snipes, announced Sunday she will resign following a string of controversies plaguing her office before and since Election Day.

Snipes sent her letter of resignation to state officials in Tallahassee just as the recount ended, her attorney, Burnadette Norris-Weeks, told the South Florida Sun Sentinel, which first reported the news. Her letter was not immediately available nor was the exact date of her resignation clear, the paper reported.

Norris-Weeks told the Sun Sentinel that the 75-year-old Snipes wanted to spend more time with her family.

Had she not quit, she faced the likelihood of being forced into retirement, POLITICO first reported last week, either by outgoing Gov. Rick Scott or incoming Gov.-elect Ron DeSantis after Broward County became the poster child for another botched Florida election. Lt. Gov. Carlos Lopez-Cantera might also be in a position to suspend her if Scott leaves office a few days early in January due to the start of the new Congress following his election to U.S. Senate.

Snipes’ office failed to regularly provide vote total updates to the state every 45 minutes as the numbers came in, causing tens of thousands of votes in the races for U.S. Senate, governor and agriculture commissioner to seemingly materialize out of thin air. That resulted in the Republicans’ margins shrinking due to the vast number of votes in the Democratic stronghold of Broward, Florida’s second-most populous county.

Then, when Scott’s Senate campaign asked for basic information concerning the number of votes remaining to be counted — information that should be readily available — Snipes was unable or unwilling to provide it. Scott prevailed.

“Every Floridian should be concerned there may be rampant fraud happening in Palm Beach and Broward Counties,” Scott said on Nov. 8, leveling an accusation of criminal wrongdoing that he couldn’t support. “And the Broward Supervisor of Elections Brenda Snipes has a history of acting in bad faith.”

During the recount, Snipes’ attorney told the news media that she had mistakenly commingled 22 questionable ballots in a pile of votes submitted to the state. But Snipes later denied that. She then submitted the results of the first machine recount late to the state.
Then, during a manual recount, she could not account for about 2,000 ballots.

Democrats also are upset with Snipes. The ballot she designed for the election tucked the U.S. Senate race in the bottom left-hand corner of the page under the instructions. As many as many as 25,000 voters did not vote in the race — perhaps because they did not see it — making the under-vote rate in the Senate race in the county disproportionate high compared to other counties.

Some Democrats believe that the bad ballot design might have cost Sen. Bill Nelson his seat, which he lost by just 10,033 votes out of nearly 8.2 million cast.

The 2018 midterms weren’t the office’s first brush with controversy. It broke federal law by destroying ballots that a failed candidate had a legal right to review, a judge ruled this year. About the same time, Snipes lost a court case against the Republican Party of Florida over the way she handled vote-by-mail absentee ballots. In 2016, she sent out a handful of misprinted absentee ballots as well.

As far back as 2004 — her first major election as supervisor — Snipes reported that 58,000 absentee ballots were lost.

The problems in Broward preceded Snipes. Her predecessor, Miriam Oliphant, was suspended from office by then-Gov. Jeb Bush in 2003 after botching the 2002 primary. He replaced her with Snipes, who was subsequently reelected. Along with President Donald Trump and Sen. Marco Rubio, Bush called on either Scott or DeSantis to kick Snipes out of office.

“There is no question that Broward County Supervisor of Elections Brenda Snipes failed to comply with Florida law on multiple counts, undermining Floridians’ confidence in our electoral process,” Bush said on Twitter last Monday. “Supervisor Snipes should be removed from her office following the recounts.”

Source: https://www.politico.com/states/florida/story/2018/11/18/facing-suspension-by-governor-browards-election-chief-calls-it-quits-703498
Droolin’ Dog sniffed out this story and shared it with you.
The Article Was Written/Published By: mcaputo@politico.com (Marc Caputo)