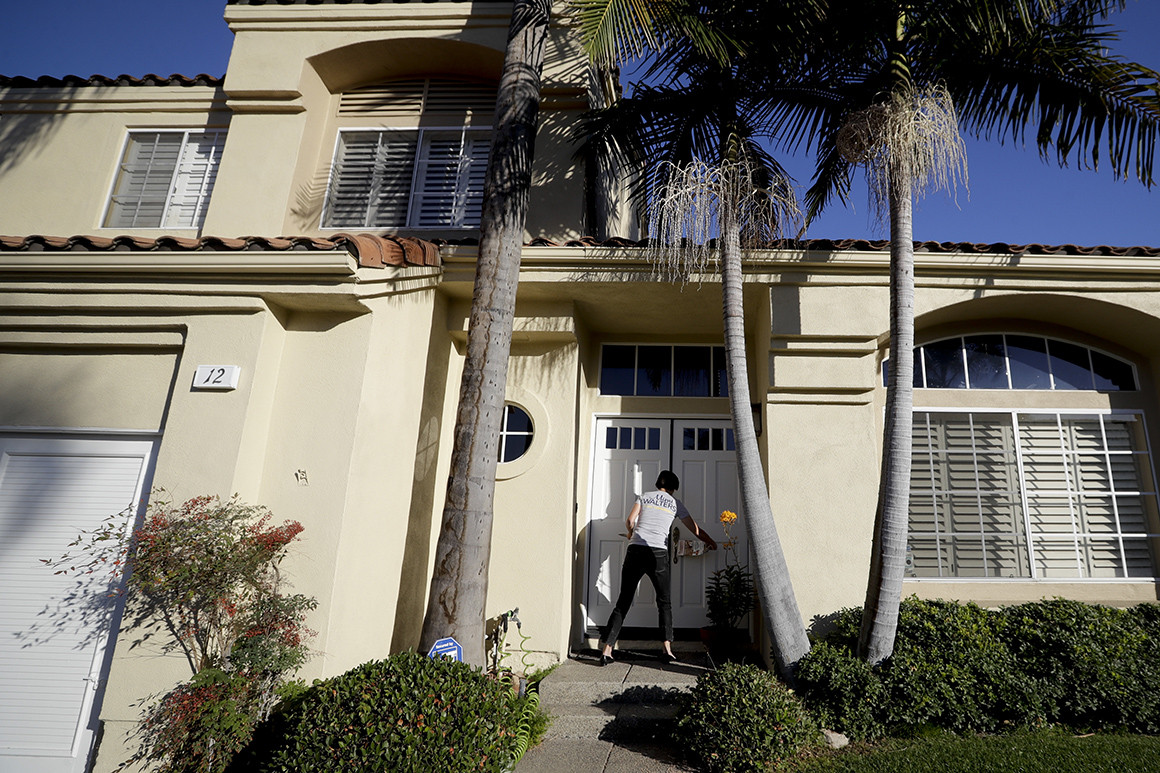 LOS ANGELES — In the wake of a near-political annihilation in California that has left even longtime conservative stronghold Orange County bereft of a single Republican in the House of Representatives, a growing chorus of GOP loyalists here say there’s only one hope for reviving the flatlining party: Blow it up and start again from scratch.

That harsh assessment comes as Republicans survey the damage from the devastation of a “blue tsunami” in California which wiped out five GOP-held House seats — with more still threatened — while handing every statewide seat and a supermajority to the Democrats in both houses of the state legislature this week.

“I believe that the party has to die before it can be rebuilt. And by die — I mean, completely decimated. And I think Tuesday night was a big step,’’ says veteran California GOP political consultant Mike Madrid. “There is no message. There is no messenger. There is no money. And there is no infrastructure.”

Republicans like Madrid also mourned another low point this week: the defeat of Southern California Assemblyman Dante Acosta, marking the demise of the last GOP Latino legislator — in a state where Latinos comprise the fastest-growing electorate.

GOP strategist John Weaver, who has worked California races and also has represented the presidential campaign of Ohio governor John Kasich, seconded Olsen’s view, tweeting that the effects of the Trump presidency have doomed any chance of resurrection. “In one fell swoop Trump & Republicans who willingly handcuffed themselves to him have turned Orange County into a GOP wasteland,’’ he tweeted this week. “You want to see the future? Look no further than the demographic death spiral in the place once considered a cornerstone of the party.”

Madrid argues that many California Republican leaders remain in complete denial of the fact that their continued support of Trump presidency has sealed the fate of the GOP — and last week’s midterm elections revealed the true extent of the GOP’s rot in California, where the state party has now shrunken to third party status.

“Now, it’s just open warfare. The barbarians have broken through the gates. The army is in full retreat,’’ said Madrid, who adds there’s no hope left for a party that for years has been on a path toward destruction. “Burn it to the ground. I want to reconstitute.’’

Republicans looking at the ashes of the midterm results say they must envision what a new party will look like — after the current structure and its leadership has been entirely disassembled.

“That’s the question: how do you start over?,’’ said Joel Fox, a longtime GOP strategist who publishes the “Fox & Hounds Daily” commentary site. He says the answer will be more wide-ranging than finding “one dynamic leader” — celebrity or billionaire — to rescue their cause.

“The rise of the Republican Party may really depend on the Democratic Party,’’ Fox said, and how it handles the heady times of having a $14 billion surplus and a supermajority under the leadership of the incoming Governor-elect Gavin Newsom. If progressives try to push their agenda too far, and land too many pro-tax ballot measures in front of the voters in future ballots — including revisions of the landmark property tax measure Prop. 13, soda taxes and oil taxes — it’s possible they will create an opening for the GOP to return to viability.

Not everyone agrees that Trump is the cause for the party’s bottoming out. This week, former state GOP chair Shawn Steel, a member of the Republican National Committee, argued in an op-ed published in the Washington Examiner that “it’s not Trump” who lost Orange County dominance for the party. He laid the blame on millions of dollars in “dark money” raised by Democrats, who he said were aided by better organization and help from the tech industry in Silicon Valley. And — without any substantiation — Steel also claimed Democratic voter registration drives produced “borderline fraudulent turnout rates” in some key districts.

Already, a leading pro-Trump Republican voice — former gubernatorial candidate Assemblyman Travis Allen, a far-right conservative who fully supports the president’s wall and immigration policies — has kicked off his campaign to head the state GOP, announcing that it’s time to “take back California.”

But a growing number of Republicans in the party’s #NeverTrump wing — which includes prominent strategists like Rob Stutzman and Luis Alvarado — insist that a new beginning will rely heavily on a full-throated repudiation of Trump’s caustic divisiveness. They believe the rebuilding process could require years, if not generations, to rid the state GOP of the taint of a president who is blamed for ramping up anti-immigrant sentiment in a state that is home to more immigrants than any other in the country.

This isn’t the first time the dilapidated Republican Party in California has faced a dire outlook — or debated the notion that it must be completely overhauled. In 2007, then-Gov. Arnold Schwarzenegger was lambasted by Republicans when he delivered an address to their state convention warning that the GOP was “dying at the box office’’ because they lacked inclusive messaging and policies, particularly to minorities who now dominate the state’s demographics.

And in assuming the leadership of the party in 2013, former state Sen. Jim Brulte predicted it would take at least six years to rebuild the structure and fundraising strength of Republican in California. He warned then that Republicans would need to “either stop the bleeding and/or start turning it around” in 2014 — or the party will be in the pits “for the rest of the decade.”

None of that altered the party’s downward trajectory, however, or caused a wholesale rethinking among some leading candidates and party leaders. Madrid cites the recent gubernatorial contest in which Republican nominee John Cox, who described himself repeatedly as a “Jack Kemp” Republican, pushed for Trump policies that are abhorrent to many Californians.

“It is completely unfathomable…for a Republican nominee to run on building a wall,’’ said Madrid, a nationally recognized expert on Latino voting trends who noted that the party has spent 20 years trying to extricate itself from the damage done by Prop. 187, the anti-illegal immigration ballot measure that eviscerated Latino support in the state. “And everyone acts like it’s normal…Cox was running on that, in California. Are you out of your mind?”

Madrid, who most recently advised the gubernatorial campaign of former Los Angeles Mayor Antonio Villaraigosa, a Democrat, said the party needs to stop looking for silver bullets — like a gas tax repeal — and confront the disintegration of some of the state GOP’s once most reliable electorates, especially college-educated voters and women.

“We hemorrhaged college-educated Republican voters on Tuesday night. The ‘diploma divide’ is a very real thing,” he said. “The smaller it gets, the more monolithic is gets. The whiter it gets. The more populist-nationalist it gets. What you’re seeing in the Republican Party is that it’s the party of white identity politics.”

Democratic political strategist Darry Sragow says if the party continues on its current path, its complete disintegration is entirely predictable.

“They’re down to 24 percent registration. And the reason is that they have a huge deficit with Latinos, with African Americans…and with Asian Americans. And they now have a deficit with whites,’’ he said. “You’re talking about a party where 77 percent of Republican likely voters in California are white. And the population that’s white here is 39 percent.”

His advice: “They have to take down the ‘whites only’ sign from the clubhouse door,’’ Sragow says. “And if they’re willing to allow people who aren’t white into the club, they may be able to recover.’’

“I think that the GOP is capable of turning itself around, because it’s a well-established brand,’’ he said. “The problem is, the people who manage the party are going to have to be willing to do that. And by definition, they are the opposite of that. They have no interest in that.”

Source: https://www.politico.com/story/2018/11/17/rip-california-gop-republicans-lash-out-after-midterm-election-debacle-1000481
Droolin’ Dog sniffed out this story and shared it with you.
The Article Was Written/Published By: Carla Marinucci