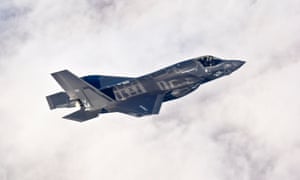 The new F-35 Lightning II fighter, currently undergoing flight trials on the carrier HMS Queen Elizabeth in the US, faces an unusual weather hazard. Ironically, the Lightning II is vulnerable to lightning.

The F-35 is an advanced, stealth jet. While most planes have metal skins, the F-35 is made of advanced composites. A metal skin conducts lightning harmlessly, but composite aircraft may be damaged by a strike. Fuel explosions are a particular risk. As fuel is used up, the empty space in the tank must be filled with an inert gas such as nitrogen, to prevent sparks. A problem with the F-35’s inerting system in 2015 meant planes was prohibited from flying within 25 miles of a thunderstorm. This was resolved on US aircraft, but Australian F-35s had to avoid storms this year because of continuing concerns.

Source: https://www.theguardian.com/uk-news/2018/nov/14/weatherwatch-f-35-fighters-worst-enemy-could-be-lightning
Droolin’ Dog sniffed out this story and shared it with you.
The Article Was Written/Published By: David Hambling