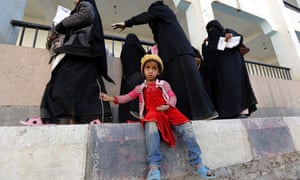 As opposition to US involvement in war grows, House Republicans opted for rare procedural ploy that could prevent a vote

Congressional Republicans have used a highly unusual manoeuvre to stop a debate about US military involvement in Yemen, attaching a one-line rule change to a resolution about wolves.

Republicans won a vote on the procedural ploy in the House of Representatives on Wednesday evening, stopping a resolution aimed at ending US support for the Saudi and Emirati war effort in Yemen, by ensuring it does not go to the floor of the chamber for a debate.

Source: https://www.theguardian.com/us-news/2018/nov/14/republicans-yemen-war-powers-saudi-arabia
Droolin’ Dog sniffed out this story and shared it with you.
The Article Was Written/Published By: Julian Borger in Washington