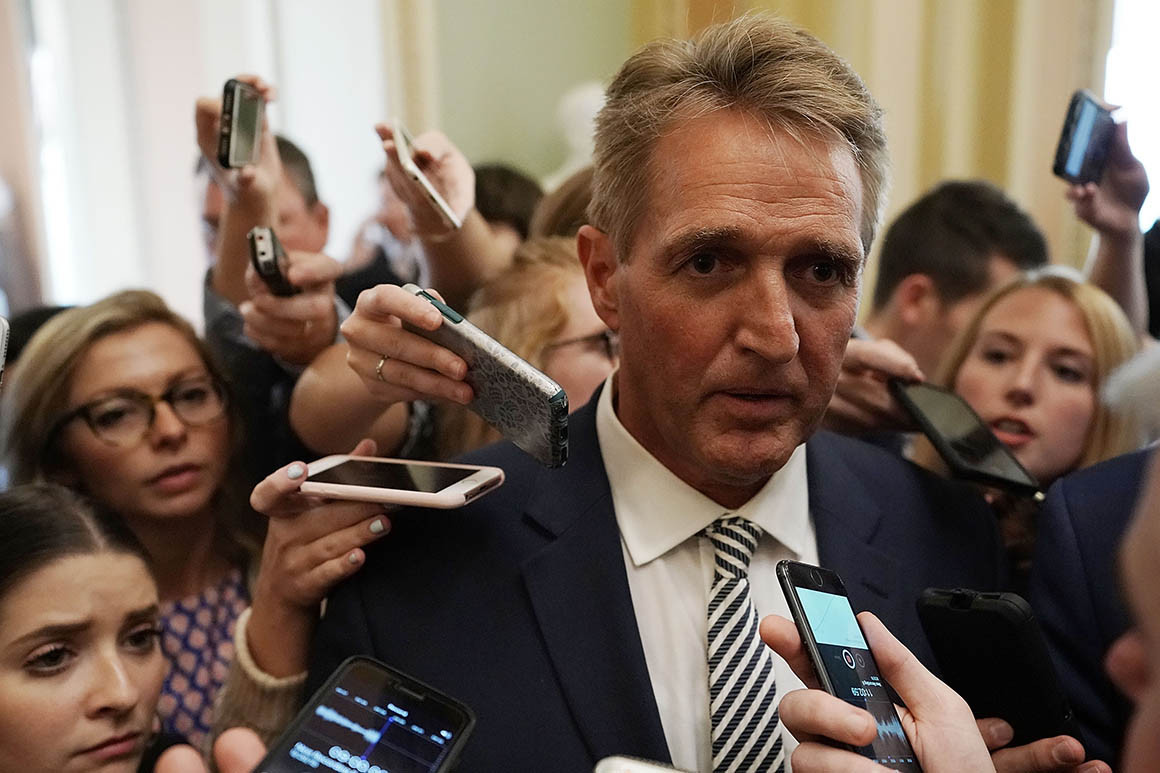 Flake announced his move during a failed attempt to get unanimous consent for a vote on the bill designed to shield Mueller from being fired by Trump. His gambit promises to make trouble — but not an insurmountable amount — for fellow Republicans as they churn ahead with a blistering pace of confirming Trump’s judges. The party has only a one-vote majority in the Judiciary Committee and a 51-49 advantage on the Senate floor.

The Arizona Republican, who last week declined to rule out a run in a 2020 GOP presidential primary, took aim at Trump for dismissing the Russian electoral meddling that Mueller is charged with investigating.

“Our president has been so incurious that at times over the past two years he has been eager to accept [Vladimir] Putin’s denials at face value,” Flake said on the floor, speaking alongside Sens. Chris Coons (D-Del.) and Cory Booker (D-N.J.).

But Flake’s bid to play hardball has a quick expiration date since he’s retiring at the end of the year. Twenty judicial nominees are currently waiting for a vote in the Judiciary panel, in addition to another nominee still awaiting a hearing, and 32 nominees have already cleared committee but not yet gotten a floor vote.

Majority Leader Mitch McConnell (R-Ky.) objected on the floor to Flake’s request for a vote on the Mueller protection legislation. McConnell can seek to bring nominees straight to the floor without a favorable verdict from the Judiciary Committee — although such moves are rare. And with Vice President Mike Pence breaking a tie, it’s possible to confirm the nominees already teed up for a floor vote without Flake’s support.

Even so, Flake’s move raises the stakes of debate on a Mueller protection measure that cleared the Judiciary panel in April but has stalled without a floor vote as McConnell reiterates doubt that the special counsel’s job is in danger. Senate Minority Leader Chuck Schumer (D-N.Y.) has said he’ll push for the Mueller bill to get added to spending legislation that must pass to keep the government open past Dec. 7, but it’s unclear whether Democrats have enough leverage to extract that concession.

“There has to be a viable strategy, because there’s enough support for protecting the special counsel that I think … there will be a way to do it,” said Sen. Richard Blumenthal (D-Conn.), who added that fellow Democrats are “still thinking through” how best to force consideration of the bill.

Democrats appear to have their work cut out for them. Trump’s ouster of Attorney General Jeff Sessions is perceived by many of the president’s critics as a pretext to ending Mueller’s probe. But it also hasn’t appeared to shake the GOP consensus that the special counsel is safe to finish his investigation into Russian interference and any alleged wrongdoing by Trump.

Sen. Thom Tillis of North Carolina, one of the lead Republican authors of the Mueller protection bill, said Wednesday that he didn’t foresee Sessions’ ouster heightening the “threat of Mueller being prevented from finishing his business.”

At a press conference after their floor remarks, Flake and Coons said that they would consider joining the push to add the Mueller protection bill to a must-pass spending bill. Flake acknowledged that he had less power given that Pence could break a tie during floor votes but reiterated the importance of opposing nominees in committee.

“There’s such a slim margin on the floor and some members are sticklers for precedent,” he said. “You don’t want to get in the habit of nullifying a committee action.”

Flake said that he was also speaking to fellow GOP members about taking similar actions against judicial nominees whose floor votes are pending and predicted that if the Senate votes on the bill, it will “pass overwhelmingly.”

The Arizona Republican also joined Coons and many other Democrats in calling for Sessions’ replacement, Acting Attorney General Matthew Whitaker, to recuse himself from overseeing the Mueller investigation.

Source: https://www.politico.com/story/2018/11/14/flake-mueller-investigation-trump-judicial-nominees-991236
Droolin’ Dog sniffed out this story and shared it with you.
The Article Was Written/Published By: mlevine@politico.com (Marianne LeVine)