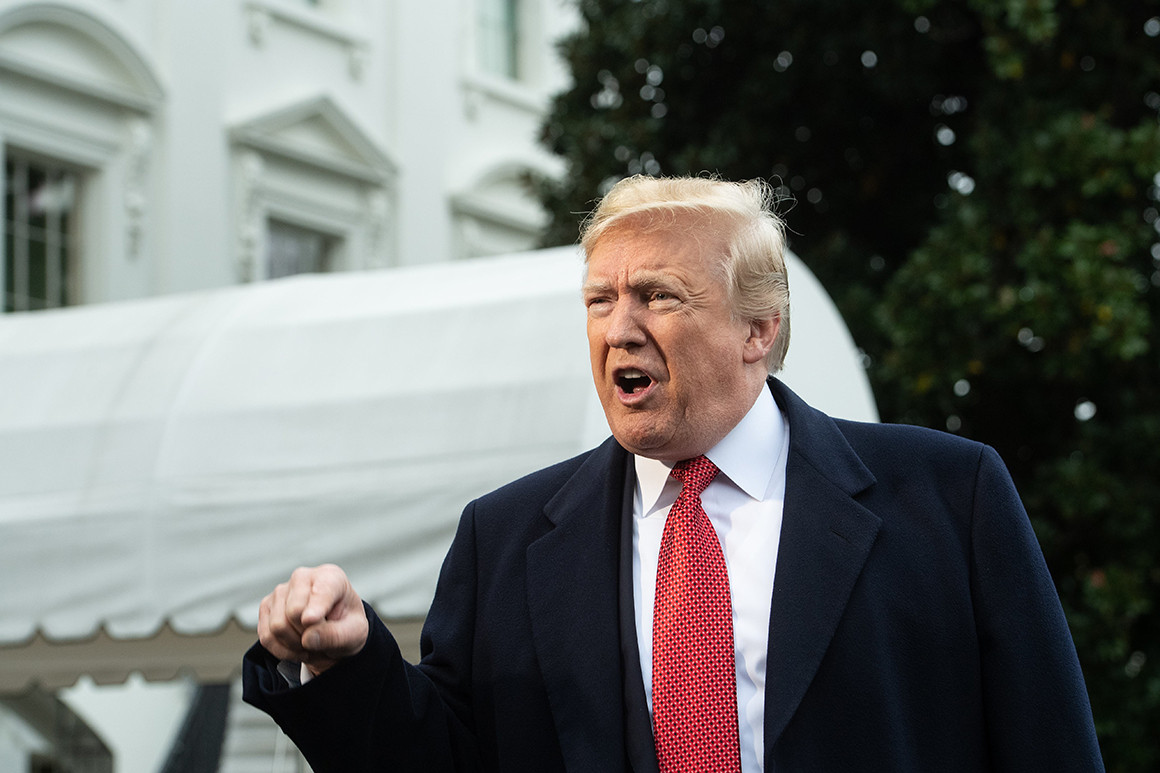 Bottled-up hostility in President Donald Trump’s administration flowed to the surface Tuesday, in a remarkable 12-hour period following an awkward midterm détente and tense presidential trip to Paris that he’s still seething over.

“It’s like an episode of ‘Maury,’” one former Trump aide observed to POLITICO as the spectacle unfolded. “The only thing that’s missing is a paternity test.”

At the White House, Trump appeared poised to dismiss Homeland Security Secretary Kirstjen Nielsen, a source of personal frustration for months over what he views as weak leadership on border security and other enforcement policies he’s sought to implement.

The fresh round of backbiting and post-midterm turnover could also sweep out Trump’s chief of staff John Kelly, a close Nielsen ally, and see him replaced with Vice President Mike Pence’s chief of staff, Nick Ayers, who is re-emerging as a leading candidate, according to several White House officials and others close to the presidential orbit.

On Tuesday, the West Wing staff morass that had long been building, but that the president personally subordinated to put up a unified front for the midterms, spilled over to the East Wing, with first lady Melania Trump openly calling for the ouster of one of the top officials on the National Security Council — a rare public rebuke.

Her office had said in its statement that Mira Ricardel, the deputy to national security adviser John Bolton, did not belong in the White House anymore. While it didn’t elaborate, The Wall Street Journal reported that the president had decided to fire Ricardel at the first lady’s urging after clashes regarding her recent solo trip to Africa.

“Peter very badly misspoke,” he added. “He was freelancing.”

White House aides and advisers have long anticipated an internal staff reckoning once the uneasy truce broke and the dust settled after the elections. But some conceded that the drumbeat of exits, the threat of subpoenas from the Russia probe and anticipated investigations by a newly empowered Democratic House — along with the raft of negative media attention in recent days — were taking a heavy toll on not only the president, but also on their own thinning ranks.

Trump himself did not tip his hand on any of the higher-ranking staff moves. But at a diya-lighting ceremony in the White House commemorating the Hindu festival Diwali, he announced the nomination of Neomi Rao, an administrator with the Office of Information and Regulatory Affairs, to fill the vacancy left in the D.C. Circuit Court of Appeals by Justice Brett Kavanaugh’s move to the Supreme Court.

In private and on Twitter, Trump succumbed to darker forces, fixating on the media as late midterm returns continued to tilt in favor of Democrats, bolstering their House majority and making what seemed on Election Night like a history-defying achievement for the president and Senate Republicans a decidedly routine showing.

Trump has kept a light public schedule while stewing over unflattering domestic and international headlines, all amid a First Amendment-focused lawsuit that CNN filed against the president and top administration officials on Tuesday demanding that its correspondent Jim Acosta’s access to the White House be restored.

This internal upheaval came on the heels of Trump’s trip to Paris, where European leaders distanced themselves from his rhetoric and President Emmanuel Macron of France implicitly rebuked Trump in front of 70 other world leaders during an Armistice Day ceremony by criticizing the very idea of nationalism.

Already dismissive of Trump, Parisians barely paid attention to the U.S. president during his visit except to mock him. Two French tabloids over the weekend ran cover photos of Trump along with the headlines: “Why Trump threatens us” and “Macron’s other front.”

The fallout from the Paris trip clearly remains on Trump’s mind, since he tweeted five times on Tuesday morning about Macron, trade with France and his own canceled trip to an American cemetery outside Paris because of overcast, rainy weather.

“The problem is that Emmanuel suffers from a very low Approval Rating in France, 26%, and an unemployment rate of almost 10%,” Trump wrote on Twitter. “He was just trying to get onto another subject. By the way, there is no country more Nationalist than France, very proud people-and rightfully so!……..”

He blamed the Secret Service for the cancellation of the cemetery visit — contradicting what his press secretary told reporters over the weekend, that Trump himself did not want to cause a traffic jam.

But it was the staff machinations that consumed Trump’s orbit, where advisers noted that with a fast-moving and fickle president, few things are certain.

Ayers, 36 and with three young children, has weighed returning to the private sector in Georgia, where he’s held on to his house. There have also been discussions about moving him to Trump’s reelection campaign.

Nielsen’s pending exit, meantime, seemed as close to a done deal as could be described. One Republican close to the White House characterized her departure as “imminent” — within the next week or two — and indicated that once her firing or resignation was announced, she would leave the administration within hours or days, similar to the recent firing of Attorney General Jeff Sessions.

Nielsen has clashed with the administration’s hardline immigration hawks, including Stephen Miller and staffers throughout the Homeland Security and Justice departments. They have been critical of her inability to stem the ongoing flow of immigrants into the U.S., as well as her defense of the administration’s decision to separate migrant parents from children when she appeared at the podium during a press briefing.

“There is no love lost between Nielsen and other political appointees,” said Jessica Vaughan, director of policy studies at the Center for Immigration Studies, a think tank that has advocated for far stricter immigration laws. “She and some of her staff have been considered more of an obstacle than a help.”

Trump is considering Thomas Homan, former acting director of U.S. Immigration and Customs Enforcement, to succeed her, POLITICO reported, with other possible replacements being Kevin McAleenan, the commissioner of U.S. Customs and Border Protection, and David Pekoske, administrator of the Transportation Security Administration. Another name in the mix is Maj. Gen. Vincent Coglianese, who runs the Marine Corps Installations Command.

Interpersonal conflicts have dogged Ricardel, the deputy national security adviser, since the days of the Trump transition, when she wanted the job of undersecretary for policy at the Defense Department, only to have Secretary Jim Mattis block her, a former transition official said. Eventually, Ricardel gave up landing a job at the Pentagon and found a spot at the Department of Commerce, for which the Senate confirmed her. Then, when Bolton took over as national security adviser, he brought her over to the White House as his No. 2. Her potential departure will be a political boon to Mattis and his team, the transition official added.

“The Trump administration has been so consistently off the rails that days like today just blend into everything else,” another former White House official concluded. “That in and of itself may be the biggest indictment of all.”

Source: https://www.politico.com/story/2018/11/13/trump-staffers-white-house-989243
Droolin’ Dog sniffed out this story and shared it with you.
The Article Was Written/Published By: ncook@politico.com (Nancy Cook)