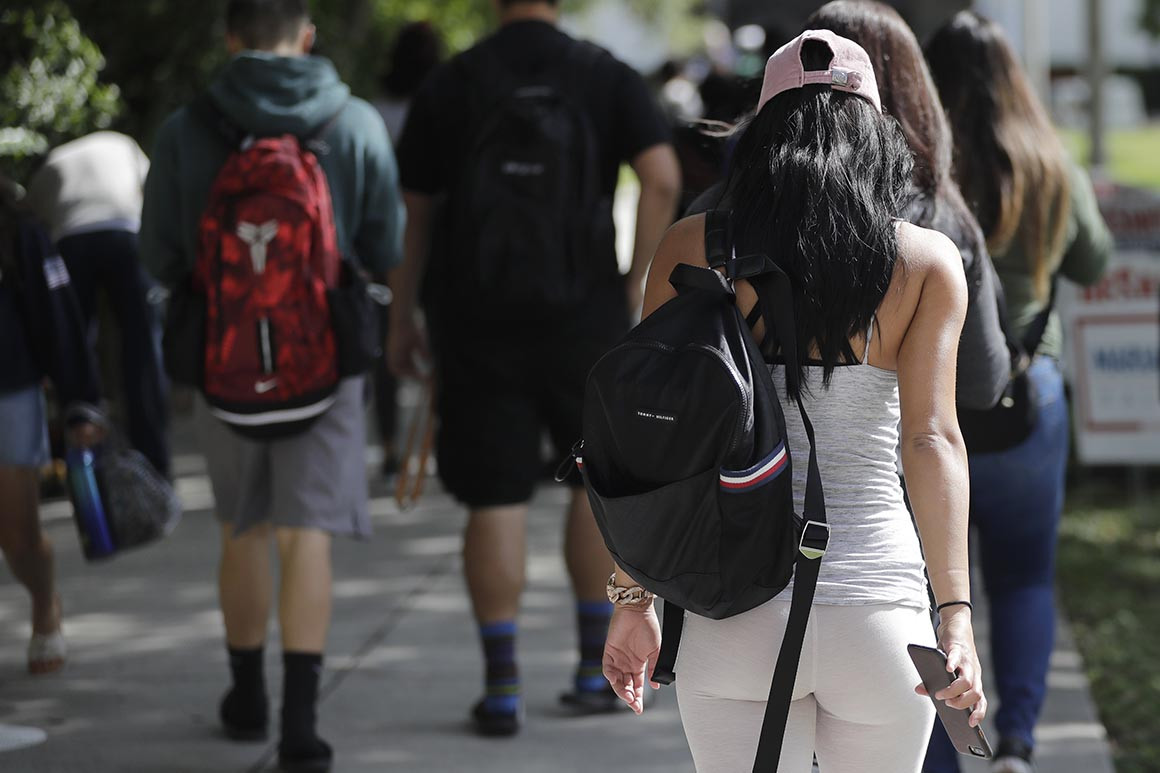 The flow of foreign college students coming to the U.S. slowed for the second year in a row in 2017 — cementing a slide that college leaders have blamed on President Donald Trump’s anti-immigration rhetoric.

The U.S. is still the top destination in the world for international students, according to a new report out Tuesday. But the number of students enrolling for the first time at American colleges in fall 2017 dropped nearly 7 percent compared to the previous year, according to the 2018 Open Doors Report on International Educational Exchange, an annual survey taken by the Institute of International Education. New foreign student enrollment in the U.S. dropped by 3 percent during the 2016-17 school year.

The authors of the report, which has been supported by the State Department since 1972, downplayed the role of politics — including Trump’s policies — in the slowdown. They instead blamed intensifying competition from universities in other countries and the rising cost of college in the U.S.

Caroline Casagrande, deputy assistant secretary for academic programs at the U.S. Department of State Bureau of Educational and Cultural Affairs, said the flattening of enrollments began in 2015-16.

“I think the decline of international student enrollments unfortunately is part of a trend that has a range of factors on it,” Casagrande said.

American colleges have largely blamed Trump because foreign competitors use the president’s anti-immigration rhetoric to aggressively recruit international students and faculty who would have typically come to the United States for their higher education. Universities in Canada, China, New Zealand, Japan and Spain all have seen gains.

Phil Honeywood — CEO of the international education association in Australia, one of America’s biggest competitors — told POLITICO earlier this year that “We don’t actually need to be negative about the American academy, as President Trump is doing more damage to ‘brand America’ on his own than any competitor country ever could.”

Peter McPherson, president of the Association of Public and Land-grant Universities, said in a statement that the slowing growth of international new student enrollment “should be of concern to university leaders and policymakers alike.”

“The global preeminence of the American higher education system must not be taken for granted,” McPherson said, noting that several states saw their overall international student numbers decline by double digits. That included Arkansas, Montana and Tennessee.

The new student enrollment slowdown could pose economic risks. International students at U.S. colleges and universities contributed $39 billion to the U.S. economy and supported more than 455,622 jobs during the 2017-18 school year, according to a separate report released Tuesday by NAFSA: Association of International Educators.

“The United States is in an intense competition for global talent, and the unwelcoming rhetoric and policies at the highest echelons of government are reverberating and inadvertently encouraging student and scholars to study elsewhere. We urge Congress to exercise thoughtful oversight and enact welcoming, inclusive policies that will allow our international ties to flourish,” NAFSA Executive Director and CEO Esther Brimmer said in a statement.

Nearly 1.1 million international students overall attended American colleges in 2017, according to the Open Doors report — up 1.5 percent from the year before. International enrollment grew even as the number of new students declined because more students stayed in the U.S. for training programs. The number of students in Optional Practical Training programs, temporary employment directly related to their area of study, grew by nearly 16 percent.

China yet again sent the most students in 2017 — 363,341, nearly a third of all international students in the U.S. That marked a 3.6 percent enrollment bump, even as the Trump administration has been especially aggressive toward China, going so far as to consider banning student visas for Chinese nationals.

The proposal, which was pushed by White House aide Stephen Miller and other immigration hawks in the administration, was canned over concerns about its economic and diplomatic impact, FT reported last month.

India, South Korea, Saudi Arabia and Canada were also among those sending the most students to America last year, though the number of students coming from the latter three declined in 2017, according to the Open Doors report.

New York, California and Texas were the top destinations for international students, with New York University, the University of Southern California and Northeastern University in Boston the schools enrolling the most foreign students.

Source: https://www.politico.com/story/2018/11/13/colleges-foreign-students-trump-985259
Droolin’ Dog sniffed out this story and shared it with you.
The Article Was Written/Published By: bwermund@politico.com (Benjamin Wermund)