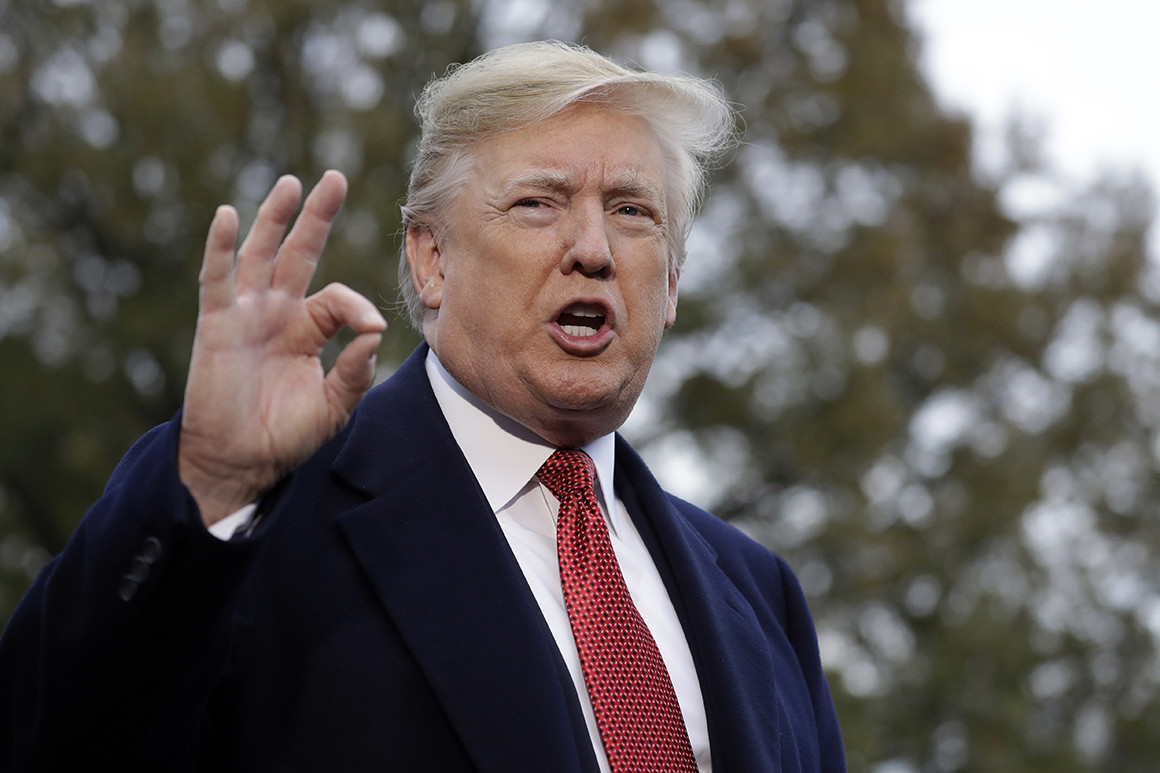 President Donald Trump fired off a series of agitated tweets on Friday about the looming Florida recount, alleging “election theft” in the Senate race and suggesting without evidence that Democrats were falsifying votes to undermine GOP candidates.

Trump’s unloading began Friday morning as he spoke to reporters while leaving for Paris. He slammed the hold-up in Democratic-leaning Broward and Palm Beach counties that has thrown the state’s gubernatorial and Senate races into flux. The two counties are in their third day of reporting votes, and Broward, which has a history of controversial vote-counting processes, still has not offered an estimate of the amount of outstanding provisional and absentee ballots it has yet to count.

As Trump prepared to board the transatlantic flight, he told reporters that there “could be” intervention by the federal government.

Florida’s Senate race between Republican Gov. Rick Scott and Democratic Sen. Bill Nelson, as well as its governors’ race and a race for state agriculture commissioner, are now within close enough margins to trigger an automatic recount under Florida election laws, due to lagging vote counts being reported by those two counties.

“All of a sudden they’re finding votes out of nowhere,” Trump claimed Friday, noting that Scott’s lead in the Senate race has been narrowing with each batch of votes reported by the two heavily Democratic counties.

In a tweet posted aboard Air Force One, Trump called the snafu “an embarrassment to our Country and to Democracy” and asked why elections officials there “never find Republican votes.”

“[Scott] easily won but every hour it seems to be going down, I think that people have to look at it very very cautiously,” he said, following up on Twitter by appearing to joke that the issues in Florida — and a similar controversy in Georgia’s still-undecided governors race — could be attributed to Russian interference.

“You mean they are just now finding votes in Florida and Georgia – but the Election was on Tuesday? Let’s blame the Russians and demand an immediate apology from President Putin,” he wrote in a tweet.

Trump suggested that Broward was purposely taking its time to report vote totals so that it could falsify votes in favor of Democratic candidates.

The president tweeted thanks to Florida Sen. Marco Rubio, who has also ripped Broward election officials for their “incompetence.” And he escalated his accusations by suggesting that “election theft” could be occurring.

“Thank you @marcorubio for helping to expose the potential corruption going on with respect to Election Theft in Broward and Palm Beach Counties. The WORLD is now watching closely!” Trump wrote.

However, Gretl Plessinger, a spokesman with the Florida Department of Law Enforcement, said it is not aware of any allegations of fraud.

Trump also said that the situation should be “cautiously” examined because of what he said was a suspect hiring by Scott’s opponent, Nelson.

As part of the recount effort, Nelson retained attorney Marc Elias, who has ties to former Democratic presidential nominee Hillary Clinton. Elias was responsible for hiring the opposition research firm Fusion GPS, which hired a former British intelligence officer who compiled a dossier full of salacious and unverified claims that insinuate the Russian government possesses compromising information on Trump.

“And then you see the people and they were involved with that fraud of the fake dossier, the phony dossier,” Trump said Friday. “I guess I hear they were somehow involved or worked with the GPS Fusion people, who have committed … what they’ve done, I mean you look at the dishonesty.”

Trump also alleged that Broward would have done the same to him in the 2016 presidential election had he not been “winning by so much in Florida” that he ran up the vote elsewhere in the state. Despite only garnering 31 percent of the vote in Broward County in 2016, Trump still lost the state to Hillary Clinton by 1.2 percent, according to the Florida Division of Elections.

But Trump urged Floridians not to worry. “I am sending much better lawyers to expose the FRAUD!” he wrote.

“Mayor Gillum conceded on Election Day and now Broward County has put him ‘back into play.’ Bill Nelson conceded Election – now he’s back in play!? This is an embarrassment to our Country and to Democracy!” Trump said, falsely stating that Nelson conceded.

Gillum struck back on Twitter, writing, “What’s embarrassing to democracy is not counting every vote — and you, of course. Count every vote.”

Matthew Dixon contributed to this report.

Source: https://www.politico.com/story/2018/11/09/trump-florida-recount-russia-dossier-980178
Droolin’ Dog sniffed out this story and shared it with you.
The Article Was Written/Published By: coprysko@politico.com (Caitlin Oprysko)